* Tis the Season for Murder *

Ah, it’s the season to replay our favorite holiday films, while trimming the tree and drinking eggnog - that magical feeling of the season wipes the slate clean again, for a new year of fellowship.

Uh, wrong decade, Merrymakers. This Top Ten from the mean streets offers up an alternative choice when you just can’t stand watching another version of A Christmas Carol. 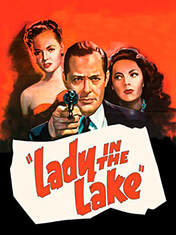 Robert Montgomery and Audrey Totter carefully tread around NoirLand’s most famous experimental flop. The odd first-person perspective has become something of a cult favorite among noir fans, with Montgomery’s debut as director and his last film for MGM.

Montgomery plays the terse Det. Phillip Marlowe, with a sterling cast that includes Ms. Totter, Jayne Meadows, Lloyd Nolan, and Leon Ames. The story is almost as convoluted as the point of view, but Totter and cinematographer Paul Vogel lend a polished look to an otherwise smug production. 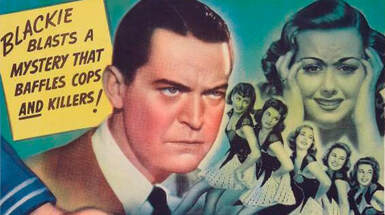 For those who love the old black-and-white B film franchises, here’s a charming Christmas gem, serving up laughs, larceny, and of course - murder. Chester Morris stars in Alias Boston Blackie, where a holiday trip to his old penitentiary drops him into a new case of revenge, murder, and conflict with his skeptical adversary.

Morris and his usual crew of reformed grifters and ex-cons spread a lot of holiday cheer - not to mention laughs - as they search the mean streets for an escaped convict accused of murdering a snitch.

Chester Morris and his crew delighted audiences from 1941 to 1949 in 14 Boston Blackie films, solving cases with lightening humor and a lot of help from former criminal associates. Somewhat formulaic, the quips and tight editing keep these B jewels shining.

And, if you keep your eyes peeled, you’ll catch an uncredited glimpse of Lloyd Bridges (from the Seahunt tv series).

Christmas Holiday wanted so badly to be a film noir. Imagine for a moment, the studio boys at Universal, sitting with Gene Kelly and Deanna Durbin.

#1 > “Gene, baby - now you get to stretch those acting wings and soar into Badland, as a killer!”
#2 > “Deanna - sweetheart - here’s your chance to finally shed that Goodie-Two-Shoes routine and be a femme fatale - but in a good way!”
#1 > “We got Mankiewicz at the typewriter, with the script almost finished!”
#2 > “Yeah, and Robert Sidomak’s directing!”

No one realized, however, that anything based on a Somerset Maugham story was doomed to reek of solid melodrama (except, of course, for The Letter). Noir cinematographer Woody Bredell struggled to punch up the existential dread, yet created a more high-brow look than he may have intended. Christmas Holiday would go on to gross over $2 million - worth $32M in box office profits today.

And, yes - Deanna still got to sing a couple of sweet tunes. 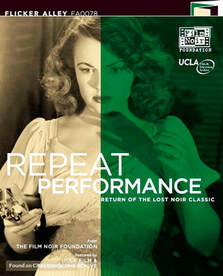 Absolutely one of my favorite holiday films, it begins with Shelia Page’s smoking gun, in time to ring in the New Year. She’s killed her abusive husband, Barney, and fervently wishes she had the year (1946) to live over again for a more positive do-over.

Metaphysical films - let alone a noir one at that - were scarce in the conservative realm of Hollywood, but this film shines like a brightly polished gem for fans of both genres. ​Repeat Performance works, thanks to a delicate balance of casting and a rock-steady script of wry, sharp humor. Leslie manages to overcome her sugar-coated persona with just the right pitch of hysteria in the face of her bitter husband and his cheap femme fatale. 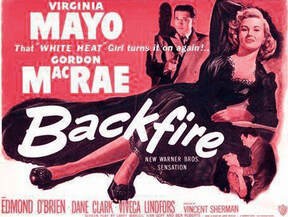 It’s hell being stuck in a hospital on Christmas Eve, and sometimes it feels like hell plowing through this Warner Bros. noir trapped inside a hum-drum crime caper. Is there a bad guy? Maybe. Where’s the femme fatale? The detective is a singer?! Are you kidding me?

Backfire, originally shot in 1948 and released two years later, is directed by the wonderful Vincent Sherman (Mr. Skeffington, The Garment Jungle), who immediately adds a touch of class to any film project. A promising cast, lead by Oscar-winner Edmond O’Brien, Virginia Mayo and Dane Clark, is another plus factor. Gordon MacRae and Viveca Lindfors (as the gumshoe and femme fatale) struggle with their roles, but all is forgiven - thanks to cinematographer Carl E. Guthrie (of Caged fame). Guthrie elevates the quality of Backfire with his clean tonal black and white range, creating a bold chiaroscuro esthetic, that flows into shimmering mood moments for the viewer.

And the final plot reveal isn’t bad either! 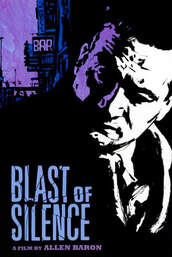 " ‘God moves in mysterious ways’, they said. Maybe he is on your side, the way it all worked out. Remembering other Christmases, wishing for something, something important, something special. And this is it, baby boy Frankie Bono…”

Straddling the realms of noir’s golden period (1940s & ‘50s) and the emergence of neo-noir (in the mid-1960s) exists the beating heart of Blast of Silence, circa 1961. This uncompromising look at the final days of a hit man may be forgotten by most cinephiles, but for noir fans this ranks as one of the top ten films of the sub genre.

Frankie Bono blows into New York City during the Christmas week to fulfill a contract on a mid-level mobster. As he puts the finishing touches on his holiday present, he suffers an existential crisis. Director, writer, and star Allen Baron delivers a minor classic that explores the bitter loneliness and isolation inhabiting every noir film. Despite a short musical snag in the middle, this hard core story reminds us just why Santa usually flies right by NoirLand. 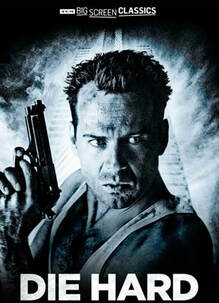 Bruce Willis ties a bow around the holiday as king of the wise-cracking cops in this first round of the popular franchise. Stuck in a metropolitan high-rise with his gun and quips, John McClane must maneuver tight spots and isolation to get the bad guy, Hans Gruber, (played to perfection by Alan Rickman) and save the day.

Luckily, his backup buddy, Sgt. Al Powell, (Reginald VelJohnson) has his trusty boots on the ground, offering sage advice and a connection to the authorities.

Little did Bruce Willis know that he would be responsible for an entire sub-genre of the  Lone Hero trope, but Action/Adventure films have been thanking him ever since - all the way to the bank. 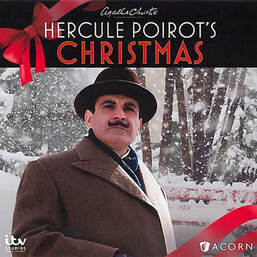 Alas! A faulty radiator and an over-bearing mining magnate rudely interrupt the famed detective on Christmas Eve, forcing him out of his exquisite comfort zone and into mystery - and of course - murder.

David Suchet delights as the iconic Belgian sleuth, exercising his little grey cells for a luxurious crowd of greedy relatives in Kent, amid a clever locked-room conundrum. And of course if Hercule Poirot must be inconvenienced, then so will the long-suffering Chief Inspector Japp (Philip Jackson). 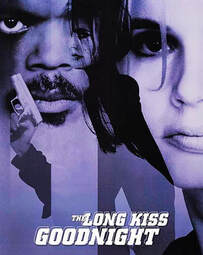 One of the earlier action films to feature a woman as the protagonist. Pair that with Samuel L. Jackson as Mitch, a freelance detective, and you have the makings of another great cult adventure. Geena Davis plays Samantha, a memory-impaired school teacher on the run for her - and her family’s - life. She struggles to remember who she is while dodging rogue assassins, and why she has a deadly skill set beyond the scope of her teaching credentials.

Christmas in her small Pennsylvania haven becomes lethal when Samantha and Mitch are forced to return to rescue her daughter, but the trio manage to save the holiday - and the town, just as the clock is about to run out.

The thriller did make $95M, but failed to please the box office bosses. Yet the diversity and positive gender representation was enough to satisfy - well, millions of fans. 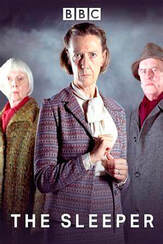 This taut thriller boasts a veteran British cast lead by Eileen Atkinson, Anna Massey, George Cole and Ciaran Hinds, centering on the Moon family as they prepare for their traditional holiday feast.

A seance and old photos dredge up family secrets for the Moon family. Matriarch Violet Moon maintains control by serving up a large helping of discord, which backfires in all directions. No one is spared in this “sleeper” mystery, which ultimately leads to a modest body count - and that’s not including the Christmas turkey!
So grab another cup of nog to go with another round of cookies and enjoy!
COPYRIGHT 2012/2023. Paulette Reynolds.  All CineMata Movie Madness blog articles, reviews, faux interviews, commentary, and the Cine Mata character are under the sole ownership of Paulette Reynolds.  All intellectual and creative rights reserved.