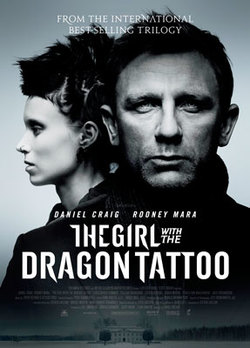 The Girl with
the Dragon Tattoo:
Neo Noir Never Felt so Cold


Rebel cyber detective teams with complacent investigative journalist in this razor-sharp murder mystery from the hit novel of the same name. Fans of the twin genres will recognize certain beloved elements of Agatha Christie and noir, complete with a cast of rather unusual suspects in an upper-crust Swedish family of dysfunctional characters.

Rooney Mara plays Lisbeth, a hard-bitten Goth girl, who’s not shy when it comes to exacting revenge on abusive males during a normal work day of computer research and planting state-of-the-art electronic spying devices. Daniel Craig simmers as Mikael, taking a break from an affair and a messy high-profile story to solve a 40 year-old murder. Together they unravel a puzzle of past events and motives, with Lisbeth applying a finely-honed deductive cerebral intensity to counter-balance Mikael’s patiently persistent line of low-key questioning. 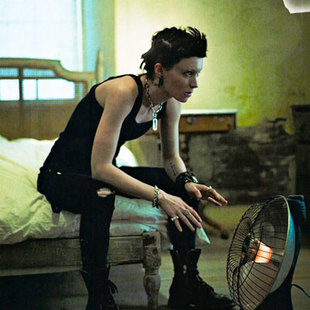 David Fincher does a fine job of using the Swedish setting to reflect the facts, now frozen in time that must stubbornly be thawed out – much like the suspects, who exude an icy calm that covers decades of seething anger and hatred. Kirk Baxter and Angus Wall’s fast-paced editing ramps up this breathless thriller that keeps the viewer firmly mesmerized. The plot’s a bit convoluted and demands complete attention, but it’s certainly well worth  the effort. A compelling musical score by Trent Reznor and Atticus Ross, gives us another reason to lose ourselves into Girl with the Dragon Tattoo.

But kudos goes mainly to author Stieg Larsson, who brings to life a female protagonist unlike any we’ve seen before. Based on the first book of a three-part trilogy, Larsson created his heroine almost as an atonement for a childhood experience, where he witnessed a young woman being raped and did nothing to help. The character of Lisbeth has little patience for evil men and lawless acts, preferring the solitary company of her computer, where she enjoys absolute control. Her softer side is a bit ragged around the edges, especially in expressing feelings that at times may appear to her to be totally unnecessary, but required for the occasion. She feels safe behind her persona of Psycho Girl, but her well-developed code of ethics implies that she’s more akin to a hero from a John Ford western. Lisbeth vaguely reminds one of Point of No Return’s lead heroine, Maggie, played by Bridget Fonda, vulnerably wild, yet Larsson’s Lisbeth fulfills a promise of a more multi-faceted character for our rapidly changing times.
* First published in Outside Hollywoodland, November 2012
COPYRIGHT 2012/2016. Paulette Reynolds.  All CineMata Movie Madness blog articles, reviews, faux interviews, commentary, and the Cine Mata character are under the sole ownership of Paulette Reynolds.  All intellectual and creative rights reserved.