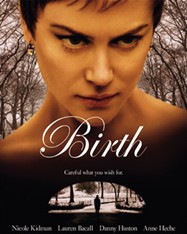 Like the central character, Sean, in Jonathan Glazer’s Birth, this review straddles two worlds, that of the indie and the art house. An indie, by its definition, is somewhat of an odd-duck movie, giving us a glimpse of another world, far removed from the mainstream perspective. And Glazer's Birth, featuring a controversial bathtub scene between an adult female and 10 year-old boy, falls neatly into that category. It juxtaposes the two worlds of the upper class Manhattan realm and the working class milieu that often don't connect. And make no mistake, this film is all about connection - or disconnection - to be exact.

Birth is an odd title begging for a definition. Everything about the twin worlds of Anna (Nicole Kidman) and Sean (Cameron Bright) raise many more questions that can possibly be answered by anyone - both audience and character alike.

The spirit of Sean, Anna's deceased husband of ten years, appears to be momentarily reincarnated in a young boy of ten years, also named Sean. In a sentimental framework, there would be a neat little reason why Sean came back: Maybe to serve up a warning to Anna or maybe to exercise some effect in the temporal world before he drifted back into the ethereal realm. No matter, because in Birth, there is no rhyme or reason to this incredible supernatural occurrence. Nestled securely within their comfortable affluent cocoon, Anna and her family seem irritated by this sudden intrusion of an extraordinary event thrust into their comfortable assumptions about Life.

When I first viewed this curious film, I was acutely aware of how every character irritated me: The emotionally detached Anna and her counterpoint in the somnambulistic Sean. The patronizing attitudes of Anna's family towards Sean's mother and father, and their submissive responses in deference to Anna's bullying matriarch, Eleanor (Lauren Bacall). But let’s not forget the smug entitlement of Anna's fiancée, Joseph, (Danny Huston) escorting Anna around like a Cartier diamond, and the oddly defiant and selfish cheat, Clara (Anne Heche). No one comes out of this film as truly appealing – even Sean's youthful persona reveals that the former Sean was actually a thoroughly unlikable fellow. The Sean that Anna idolizes beyond all recognition was able to successfully cheat on Anna with Clara -- even to the point of giving her his wife’s unopened love letters, as a sign of where his real heart really lived. And everyone’s enabling attitude towards Anna’s refusal to let go of this illusion grated on my very last nerve.

This is a sure sign that an independent film has hit its mark. The characters and the plot are not fully developed, nor thoroughly explained, because one by-product of indies is that the audience is encouraged to interpret meaning and characterization independently. Sometimes it means that the viewer is supposed to fill in the blanks that a mainstream approach would happily color in. This can be an exhausting experience for mainstream audiences, which is why the independent film market appeals to a selective circle of devotees. Yet, that’s also the inherent assumption of the independent production - that we, the audience, must actively interact with the unfettered cinematic experience at our own risk. It may lead to rejection of a film or a wondrous “ah-ha!” moment, but we must follow it through to its conclusion.

Birth adroitly examines the grieving process, not so much over actual physical death, but having to continue through that grieving stage towards the acceptance that life must be lived once again. The uncomfortable sparseness of a musical score emphasizes that Anna has hermetically sealed herself off from all the feelings that might hamper the comfort zone that she refuses to leave behind. Just as she begins to accept that Sean is her long-lost husband and remap her life course to fit that world, the child Sean suddenly becomes himself again, running off to play like any 10 year old would, leaving behind a bewildered and shaken Anna, who must try to make sense of it all – again! Her hysterical outburst at the ocean's unruly edge, with her wedding party and new husband helplessly watching, announces that Anna's raw feelings, that she’s been striving to carefully constrain, are finally *birthed* - alive and kicking.

And yes – there is that bathtub scene.