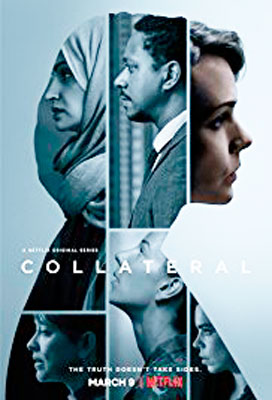 Collateral or Fear and Loathing in London
​
British Miniseries


Warning: This review is riddled with spoilers.
Is the BBC's Collateral a truly ground-breaking miniseries or just a new wave of faux feminism to satisfy their feminine audiences?  This female-centric mystery thriller reflects the gold standard for British police procedurals and was hailed by critics as a series with something special to offer fans.  Created and written by David Hare, directed by SJ Clarkson and starring Carry Mulligan to rave reviews, Netflix's latest viewing choice continues to follow a tired male detective formula in the guise of a modern feminist statement.
Carey Mulligan/Kip Glaspie and Nathaniel Martello-White/Nathan Bilk
Collateral's first episode sizzles with the sniper killing of a pizza delivery man in the heart of London, setting us up for the inevitable introduction to a cast of well-known stars, lead by Carey Mulligan.  Detective Kip Glaspie (Mulligan) and her partner Sgt. Nathan Bilk spend the better part of the episode getting stone-walled by the first round of suspects: Karen Mars, a well-manicured drug addict who ordered the pizza; Laurie Stone, the frazzled manager of the pizza joint who sent Abdullah Asif to his death; Linh, a drugged-out Asian student with an expired visa; Mikey, the delivery man who was scheduled to make the pizza run; Abdullah's sisters (Fatima and Mona) who are illegal immigrants in hiding; MP David Mars, a Labour politician who endlessly frets about his ex-wife's lack of maternal instincts, and Rev. Jane, the local lesbian vicar who's having a nagging crisis of faith.  Oh yes, and let's not forget the killer, Captain Sandrine Shaw.
Episodes two and three add another layer of players (a smoldering double spy, a ho-hum travel agent and your average sexual predator) and more sub plots to further tangle up the investigation.  Mulligan's Detective Kip is formatted along the lines of the one-dimensional cop hero, who says little and isolates herself behind a endless montage of questioning suspects, bargaining with an irritated boss and squabbling with her frustrated partner.  Sadly, David Hare breaks no new ground with such a potentially ground-breaking character, content to satisfy the notion of gender parity by just featuring a female lead character.  What's the point of going through the motions if a female detective doesn't challenge the status quo?
Ah, but with Jeany Spark's Captain Sandrine Shaw, that promise is fulfilled.  Here David Hare deftly counterpoints Kip's policewoman's Yin with a woman who embodies all the Yang military principles of action through a prism of conflicting passions that threatens to boil over with her every breath.  Both women dance in a circle of tight control, hoping their restraint will be enough to elevate their stature in a world run by men.
But Clarkson and Hare sabotage their creation by making virtually every female character either a victim or bitch: Capt. Shaw, now a rape victim at the hands of Major Dyson, rejects killing him in favor of blame-shaming his wife as the enabler, Laurie is murdered because she was going to do the right thing, and Rev. Jane reluctantly chooses the church over true love.  Women with children are specially targeted as Sandrine's mother and Karen Mars are shown as unfeeling narcissists who would rather dance with their own demons than acknowledge their children.  And Kip, herself eight months pregnant, is only too willing to run into harm's way for her job rather than seek help from her team to bring in Sandrine.  Female politicians aren't left out either, with MP Deborah Clifford (here serving as a stand-in for Teresa Mays), implausibly spouting a conservative Tory hard line while threatening her liberal peer David Mars for not toeing the party line.  And the most painful betrayal of all is at the inept hands of Kip as she pushes Sandrine to suicide because she chose to act alone.
By the end of Collateral most viewers shouldn't be surprised when the men get off easy.  The person who ordered Abdullah's killing making a clean getaway, Major Dyson lives to rape again, the gay Bishop forces Rev. Jane to choose either the church or her life partner, and metrosexual David Mars finally leaves his ex-wife - and child - to play with his new girlfriend.
The level of fear and self-loathing among the female cast of characters is palpable, but not as the result of plot development.  The creative team funneled more passion into arguing for progressive immigration reform than fine-tuning their views on female empowerment. Creating a project in the age of #TimesUp should challenge those behind the camera to seek new paradigms to inspire women viewers, but Collateral plays a deft shell game of Faux Feminism, content to cram the screen with women and then box them into old stereotypes.  This doesn't break the glass ceiling, it only reinforces the male gaze and make the audience feel cheated.

But thanks to an exceptional cast and the fine quality of production that goes into a BBC series, Collateral is still easy to binge-watch.  And while it's true that old patterns are hard to break, we can look to the genre's reigning queen detective, Happy Valley's Sgt. Catherine Cawood, (Sarah Lancashire), and see a few more holes in that ceiling.
Paulette Reynolds:
​
@PG13Reynolds
@CinesMovieBlog