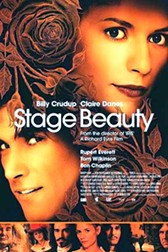 “It is not a question of acting a man. I can act a man. There's no artistry in that. There are things that I can be as a woman that I cannot be as a man.” Billy Crudup, as Ned Kynaston.

Set against the English Reformation period of the 1660, as led by King Charles the II, Stage Beauty is a saucy romp of a film beautifully directed by Richard Eyre and scripted by Jeffrey Hatcher, from his original play, Compleat Female Stage Beauty. This four-reel marvel boasts an accomplished cast, led by Billy Crudup and Claire Danes, through this gender-bender of a costume comedy-drama.

Billy Crudup plays Ned Kynaston, a classically trained actor of women’s roles during the 17th century, when female roles were forbidden to be played by – well, females. A popular star, he lounges seductively with the Duke of Buckingham, George Villiars, his upper-crust lover, between rehearsals and stage performances.

Claire Danes plays Mrs. Margaret Hughes, a widow who works as Ned’s dresser. During his performances, Maria (as she calls herself), watches in the wings, secretly longing to play the roles denied her – especially the coveted role of Desdemona in Shakespeare’s popular tragedy, Othello. She takes a chance, breaking the kings’ law, by performing – as a woman – on stage, in a vaudeville review (And hence, not subjected to the law of the land, which is stringently enforced on the legitimate stage).

Both drag star and star wannabe end up as special guests at the King’s dinner table. A lively exchange takes place concerning the merits of a woman actually acting the part of – well, a woman.

King Charles II (Rupert Everett): “Why shouldn't we have women on stage? After all, the French have been doing it for years.”

Sir Edward Hyde (Edward Fox): “Whenever we're about to do something truly horrible, we always say that the French have been doing it for years.”

The tables are turned on Kynaston, who now watches aghast as the King overturns the law, opening the floodgates for women’s roles to be played – well, only by women. He becomes an object of scorn and ridicule, as a couple of upper-class groupies enact their own brand of revenge against him for past insults.

Meanwhile, Mrs. Hughes is suffering her own humiliation of being a one-hit wonder, only to discover that being a woman, playing a woman, means little without acting ability as – well, a woman.

Ned and Maria wind up instructing each other on the ways of love and acting, all to a symphony of applause for acting – well, like a man and a woman. Through it all, they tease and snipe at each other to push the boundaries of their manufactured images, not because they care what others think, but because they care about their own sense of themselves.