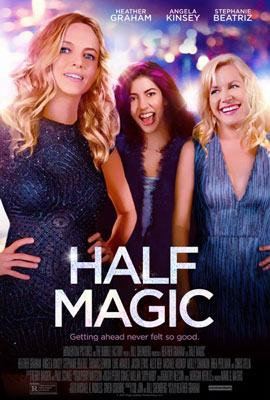 Starring Heather Graham/Honey, Chris D’Elia/Peter, Michael Aronov/John, Stephanie Beatriz/Candy, Angela Kinsey/Eva, Molly Shannon/Mistress Valesca
Heather Graham plays a sexually repressed woman with low self-esteem, who writes stories about empowered women while serving as a doormat for her boss.  Tired of the dead-end life, she goes on a helter-skelter quest to find herself through some very questionable sexual encounters. 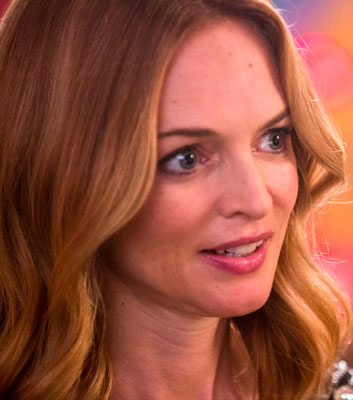 Half Magic is filled with confused cliches about sexuality, a predominantly white cast, half-baked dialog and one-dimensional cardboard men - and if this isn’t bad enough, Graham stumbles around in her own film like a lost deer in the headlights.  The cast flatlines after the first fifteen minutes, but like true professionals they act on until the bitter end.

Ms. Graham's shaky filmmaking debut isn't really the issue here, since given the chance most artists improve through experience.  Half Magic fails - for this reviewer - because it pretends to be something that it isn't.  It is not a feminist exploration into personal empowerment nor is it particularly funny.  The film - and Ms. Graham - tries so very hard to reach for meaning which is lost in the magical thinking that saying it must make it so.
She states that, “As a woman and a first time filmmaker in Hollywood, I’m glad there's more attention than ever on the sexism women have faced for years. Over the last few months, a new sexual revolution has begun, with more women than ever coming forward to share their stories of sexual harassment. Gone are the days when women felt powerless, with their abusers facing no repercussions. I chose to include these themes in my movie from a satirical point of view because, after all, I was writing a comedy. I wanted to find a way to laugh at the situations that frustrate me.”
Sadly, her debut as a writer and director seems to have overwhelmed her senses to the point that Half Magic bears no resemblance to her noble vision.
COPYRIGHT 2012/2018. Paulette Reynolds.  All CineMata Movie Madness blog articles, reviews, faux interviews, commentary, and the Cine Mata character are under the sole ownership of Paulette Reynolds.  All intellectual and creative rights reserved.