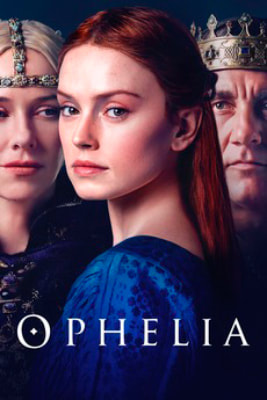 A review by Paulette Reynolds * June 28, 2021
Director: Claire McCarthy
Screenplay: Semi Chellas
Based on the novel Ophelia by Lisa Klein 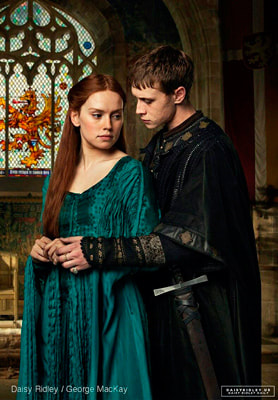 Ophelia is director Claire McCarthy's lush look at a story that's always been my favorite Shakespearean play.  Traditional versions have only allowed us to view Ophelia as a shell-shocked victim of the Danish Royal court, reeling from the mistreatment by powerful men.  This film, based on the novel by Lisa Klein, dares us to reimagine her as a liberated spirit who not only trusts her own feelings, but values her own worth as a woman, courageous enough to use her voice.
Beginning with George Melies 1907 film, there have been over 50 film versions of Hamlet...
Ophelia wastes no time in setting her apart from the other maids at court.  Her lowly status is often marked by the long hair flowing down her back, unencumbered by the elaborate braids, coils or pins that hamper the other high-born young ladies. And of course, there's her habit of going for an afternoon swim...
The lavish production suggests an Arthurian era, with its emphasis on knighthood, and for this reason the cast is pretty to look at.  Denson Baker's cinematography emphasizes this, together with a rich costuming that's usually subdued in more conventional versions. But the dialogue is delivered with much of the passion squeezed-out, relying on the visual power of the film to carry the day.
Ophelia's screenplay also gets bogged down by attempting to reconstitute Shakespeare's convoluted story into a faux feminist bedtime tale, complete with a child as the credits roll.  It reminds me of the endgame of the engrossing Hunger Games franchise, where Hollywood reminds us that really, all assertive women want is a baby for her efforts. 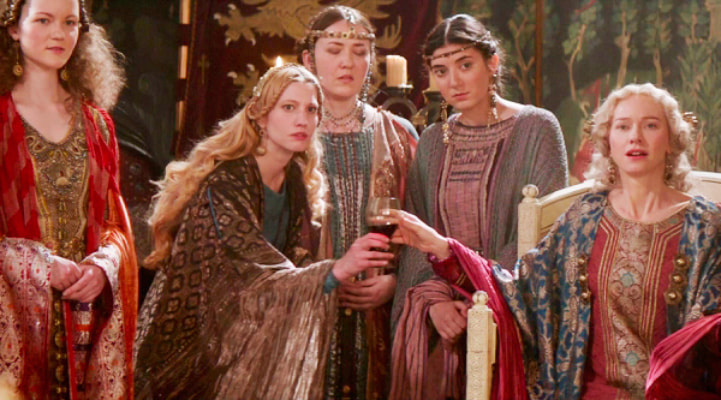 Still, there’s hope on the horizon - if women filmmakers can truly be brave enough to put down the tired 1980s tropes and choose more diverse - and modern - narrative forms.
COPYRIGHT 2012/2021. Paulette Reynolds.  All CineMata Movie Madness blog articles, reviews, faux interviews, commentary, and the Cine Mata character are under the sole ownership of Paulette Reynolds.  All intellectual and creative rights reserved.