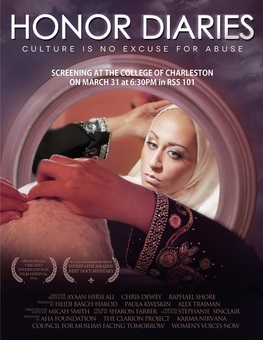 
This documentary speaks volumes about the gender inequality directed at Muslim women in their own   countries.  Created in the spirit of reclaiming their honor, dignity, and freedom, the Honor Diaries is a breath of clarity and a call to action.  This comes at a time when we live in a cloud of political correctness, where our leaders and their journalistic minions have spread a fog of silence around this urgent issue.

A winner of several film awards, the Honor Diaries is produced and directed by women, featuring nine role models  who are passionate about promoting female empowerment among their middle eastern sisters.  This film highlights their personal struggles to raise awareness about the horrors of Sharia "honor" laws - that allow genocide, genital mutilation, and forced marriages, with the singular goal  of ending  that oppression.

﻿AYAAN HIRSI ALI, is the the Executive Producer of this fine film.  She was recently denied an honorary doctorate from Brandeis University, because they submitted to pressure from ﻿the Council on American–Islamic Relations (CAIR), citing her condemnation of Islamic fascism.
﻿

The film can be viewed at their site : www.honordiaries.com