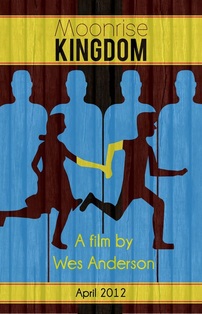 A pair of star-crossed lovers, defying everyone, all for the sake of love — wait – that’s Romeo and Juliet!

An all-star cast lands in the middle of 1965, on a fictional remote New England island called New Penzance.  Surrounded by Khaki Scout troops and a massive amount of mustard yellow and brown hues, this tender love story , wrapped in deadpan humor from start to finish, is a joy to experience.

Fresh-faced Jared Gilman and Kara Hayward easily steal the show as teen lovers, Sam and Suzy. The veteran cast of Bruce Willis, Edward Norton, Harvey Keitel, Jason Schwartzman, and company serve as a misdirected counter-point to this love story. Bob Balaban, the narrator, seems blithely unaware that his terse updates have nothing to do with the proceedings.

Directed by Wes Anderson and nominated for a pair of awards, Moonrise Kingdom feels like a Coen Brothers production, minus the stylized dialogue. Every word is spoken with seriousness set on speed dial, and the rapid-fire pacing develops a cadence all of its own.

Enjoy this light-hearted dessert of a film, because it satisfies better than a tummy full of s’mores.
COPYRIGHT 2012/2016. Paulette Reynolds.  All CineMata Movie Madness blog articles, reviews, faux interviews, commentary, and the Cine Mata character are under the sole ownership of Paulette Reynolds.  All intellectual and creative rights reserved.