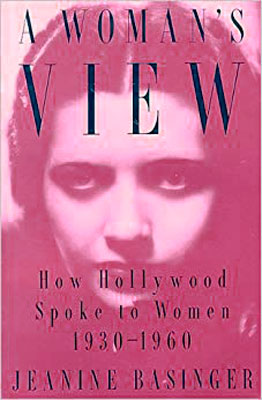 A review by Paulette Reynolds
July 16, 2018
What  elements make up a woman's film?

Once dismissively tagged as 'chick flicks', A Woman's View: How Hollywood Spoke to Women 1930 - 1960, exposes Hollywood's hidden agenda during the golden era of American cinema.  Spanning the pre-code decade of the 1930s, WWII 1940s period and the studio controlled 1950s, Basinger examines over 500 films in this pioneering work, to create a genre we now call “the woman's film”.

A Woman's View deconstructs Hollywood's visual vocabulary in building the societal expectations to be imposed on women.  The three decades of movies - almost exclusively created by males - instructed women on what their roles should be; but if one looked closely at the subterranean message, she might learn something else.
"Over and over again, conversations take place about the woman's proper role in life...Should she have sex while    unmarried or not have sex?  Should she have children or not have children?  Should she marry for love or for money?  Should she be dominated by men or should she take matters into her own hands?  Should she kill the rat who ruined her life or just grin and bear it?  By asking the questions, the film prepared an audience to find its own answers.  It's obvious that seeds of unrest, even rebellion, were planted in some female minds by the evidence they saw on-screen, despite the conventional endings that turn a story into a cautionary tale." 1
At once groundbreaking and inspirational, Jeanine Basinger celebrates the woman as a hero who:

*Defies conventional rules and redefines her life on her own terms, even if she opts to become a wife and mother. 2

* Defies not just convention but society itself, never settling for less than possession of her own life, even if she is destroyed. 2

She looks at the many facets and themes of the woman's world, weaving fashion, film, glamour and star power into a fascinating adventure that will leave the reader enriched, empowered - and proud to be a woman.

Jeanine Basinger is the founder and curator of The Cinema Archives at Wesleyan University and a trustee emeritus of the American Film Institute.  She developed the acclaimed Film Studies program at Wesleyan, where she continues to teach
​- and write - about film history and women's studies in cinema.
1/2 Basinger, Jeanine.  A Woman's View: How Hollywood Spoke to Women 1930 - 1960. Aug 32, 1993. Knopf Publishers.  July 10, 2018.
COPYRIGHT 2012/2018. Paulette Reynolds.  All CineMata Movie Madness blog articles, reviews, faux interviews, commentary, and the Cine Mata character are under the sole ownership of Paulette Reynolds.  All intellectual and creative rights reserved.