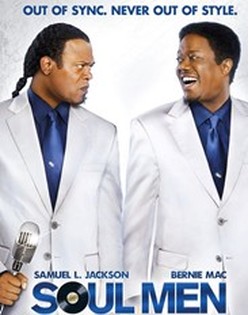 The theme of Soul Men is the unlikely reunion of a singing team of sparring partners, financially and emotionally down on their luck, conned into performing at a memorial concert for their fallen (and despised) band member. Louis and Floyd are at home on the stage, crooning and gliding in sync, just like the old days (with a few glitches along the way). One song by the late and great Issac Hayes is worth listening to, during the closing credits (Why wait until the end to play such a lovely song?).

Bernie Mac’s final appearance in a feature film should have been a joy to watch, something to delight and surprise. The surprises in Soul Men (2008) are predictable and fall flat, which is sad, as usually his material is snappier and his delivery more robust. Here he looks thin and haggard, struggling with the light-weight fare hashed-out by writers Ramsey and Stone. Another surprise is Samuel L. Jackson’s lackluster performance, which in some strange way outshines his co-star. It doesn’t help that the two stars are stuck with a story line that’s even more tired than their acting.

The genuine delight here is the energetic efforts of Affion Crockett, playing Sharon Leal’s wannabe gangster rapper boyfriend, Lester. He handles his dialogue with such clueless chaos that he makes his unsympathetic character almost endearing – no small feat for this thankless movie.

Of course there’s the standard supporting cast of white characters, portrayed as stupid, dumb or an astounding combination of the two. They, like Jackson and Mac, deliver their lines dutifully. An especially tasteless scene involving a mother-daughter groupie duo signaled that Soul Men slid into a tanker rating effortlessly. Clearly, when I want to fondly remember Bernie Mac, I'll have to catch reruns of his beloved TV series, "The Bernie Mac Show".
COPYRIGHT 2012/2016. Paulette Reynolds.  All CineMata Movie Madness blog articles, reviews, faux interviews, commentary, and the Cine Mata character are under the sole ownership of Paulette Reynolds.  All intellectual and creative rights reserved.