From the opening theme by Fever Ray, this moody and tense television series, produced by the History Channel, captivates us with characters that are finely-hewn and three-dimensional. Each plot line twists and turn down unfamiliar paths, filled with subtle meanings. Filmed in color, the cinematography is drawn in earth tones, various shades of charcoal and black hues that pay homage to film noir. Relationships in this Heathen world are not portrayed as the stereotypes that one associates with Pagan stories. The Icelandic norse Pagans revere their Gods, respect strong women, and show no mercy to their enemies. Christians demonstrate the same arrogance of faith entitlement that was their spiritual armor, as they patiently wage their never-ending wars.

The Vikings center on the oral legends of Ragnar Lothbrok, his first wife Lagertha, his brother Rollo, and an ever-growing crop of children (Björn Ironside, Halfdan Ragnarsson, Ivar the Boneless, Sigurd Snake-in-the-Eye, and Ubbe Ragnarsson). The historical framework is patterned after the 13th century Ragnars saga Loðbrókar and Ragnarssona þáttr Icelandic prose sagas, the Lindisfarne records, Ahmad ibn Fadlan's memoirs of the Volga Vikings (10th century), and the Gesta Danorum (12th century). One has to accept that this historical drama is based on records gleaned from non-Pagan documents - and hence, non-Pagan perspectives may abound.

Created by Michael Hirst, the History Channel does a masterful job comparing and contrasting the twin faiths of Paganism and Christianity. As a Pagan, I was skeptical that Hollywood could - or would - be objective when telling a story about our past. The sketchy first episodes lulled me into a skepticism that gradually gave way to a grudging respect.  As Season One concluded, it all melded together to form one of the most powerful series I've ever had the delight and honor to see, rivaling only the formidable Game of Thrones. Add to this the emphasis on the warrior shieldmaiden credo (as modeled by Lagertha)

"Ladgerda, a skilled Amazon, who, though a maiden, had the courage of a man, and fought in front among the bravest with her hair loose over her shoulders. All-marveled at her matchless deeds, for her locks flying down her back betrayed that she was a woman."
Saxo Grammaticus / Gesta Danorum / 12th century

...and I'm in a constant state of Valkyrie love.

The main cast of strongly-etched personas include Gustaf Skarsgard (Floki, the longship craftsman), Katheryn Winnick (the fierce and uncompromising Lagertha), Clive Standen (the long-suffering brother, Rollo), George Blagden (questioning monk Athelstan), and of course, Travis Fimmel (our hero, Ragnar). Together they weave many story threads into an engrossing tale of Norse culture, slamming headlong into an ever-changing world that threatens to engulf them - either by the blade or the plow. Fimmel wears his leadership like a comfortable cloak, inspiring admiration and envy, no matter what the season.

Warning - If Travis Fimmel doesn't get an Emmy nomination for his performance in Season Two, then Hollywood best be watching their manicured lawns... 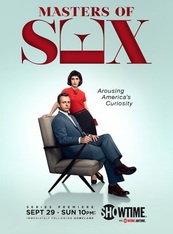 Showtime's hottest show bends their character's backstory a bit as they deftly focus on social and sexual issues that still impact both genders today. Michael Sheen effortlessly taps into the inner world of William Masters, a man more in love with the scientific process than his own wife. A talented Welsh actor (The Queen, Frost/Nixon), Sheen has perfected his signature Repressed Male persona over the years, adding another facet with each new character to hold our attention. Lizzy Caplan's Virginia is a "liberated" woman, attempting to balance child-rearing, love, and a rather eccentric job, much to the detriment of her family. Caplan's rising star power is easy to see in a finely-tuned performance that is both fascinating and refreshing.

I was ready to dismiss this new series as just another cheesy T&A rollout, but Showtime's Masters of Sex has won me over with fine directing, thought-provoking scripts, and cracker-jack casting.


Who wouldn’t like to have the Jennings living next door? Sure his wife, Elizabeth is a bit tightly wound, and Phillip seems just a touch too perky – but damn, she makes a tasty batch of brownies!

Thing is, the Jennings lead a double life as Russian spies during the Cold War of the Reagan era. It’s a tangled web for the uber-driven pair, whose American-born children Paige and Henry, live out the suburban dream, completely oblivious to their parents true calling. Their assignment is to do the bidding of the Kremlin, while employing technology and disguise, as they race against the clock to complete their mission.

Keri Russell and Matthew Rhys are the main reason to watch FX’s newest series, The Americans. As the overly competent Elizabeth, she works to keep Big Brother happy while exploring her shadow relationship with Phillip. Ms. Russell balances the right amount of steely resolve with a suspicion that she might not be as in control as she imagines. As Phillip, Matthew Rhys plays a shaky KGB agent, weary of long-distance directives, living in fear of exposure, of their children finding out, and of losing their split-level life.

Created by former CIA agent, Joe Weisberg, The Americans take advantage of the growing list of period dramas with anti-Russian sentiment. It’s well-known that Russia supports certain middle-east terrorists groups, and while The Americans might be soft-core propaganda, Elizabeth and Phillip’s marriage elevates this cloak-and-dagger tale.

The fine supporting cast of Noah Emmerich and Richard Thomas just got better with the addition of Emmy winner Margo Martindale as Claudia, a smooth KGB boss. Ms. Martindale electrified the FX series, Justified, playing against type as affably ruthless Mags. Here’s hoping that her presence will be the lucky charm needed to guarantee a season two for this weekly thriller. 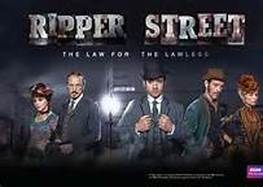 
Lord love the Brits! After bringing Downtown Abbey across the pond, one would think they’d sit on their laurels – not to mention their Golden Globe awards – and rake in the DvD revenues. Ah, but no – now they’ve gone and done it again. Courtesy of BBC America, Ripper Street is a delight for police procedural fans who love their history, too.

Matthew Macfadyen heads a smart cast (Jerome Flynn, Adam Rothenberg, Charlene McKenna, Amanda Hale) who inhabit the East London urban ghetto of Jack the Ripper’s time (hence the series title). Detective Inspector Edmund Reid, with a taste for the dark side of town, recruits an unwilling team of characters together to solve knotty crimes. In between gambling, drinking, and whoring, our Ripper Street police team – an unsteady coroner, a cynical sergeant, and a madam – solve grim cases in a city that doesn’t really give a damn.

Inspector Reid leads his colorful cohorts with dry wit, unbiased intelligence, and a nonplussed gentility that sharply contrasts his bloody surroundings. He travels impassively from one grisly crime scene to another, without so much as a twitch of the eye. His only weak spot lies in his convoluted relationship with his wife, Emily, whose passion focuses solely on rehabilitated Whitechapel’s fallen sisters. Amid slashings, hangings, theft, rape, and dirty secrets, Ripper Street brings to life the late 1880s without a spare measure of compassion but always commands us to look.


CINE UPDATE / April 2014…Ripper Street has been saved for its third season, to be viewed on Amazon Prime Instant Video.
COPYRIGHT 2012/2016. Paulette Reynolds.  All CineMata Movie Madness blog articles, reviews, faux interviews, commentary, and the Cine Mata character are under the sole ownership of Paulette Reynolds.  All intellectual and creative rights reserved.