The summer of 2018 is bursting with the raw spirit of an evolving narrative for women in television - and it's about time.  Thanks to the inclusion of more female writers, directors and producers, there's a noticeable shift in the way telegenic characters are speaking to us.  Their voices are unique, unafraid and unwilling to be second-class citizens - in other words, unforgettable.  Here are just three series currently heating things up on the airwaves.

Family, old friends and the local townies aren't rolling out the welcome mat for her, as many see Camille's arrival as just another slice of drama from someone they want to forget.  For Camille, the hostile attitudes only serve to relive old nightmares that she can barely keep hidden.

Amy Adams resurrects a familiar character trope of the troubled reporter as reluctant detective.  My favorite one was Selena St. George, played by Jennifer Jason Leigh in the 1995 caustic mystery classic, Dolores Claiborne.  Booze, pills, and bitter memories were her closest friends, constantly nagging as she resentfully stormed around her small town hell to save Dolores from the gallows.

But Adams turns in a different direction to create a multi-layered woman who drifts from one unsettling scene to another as though she no longer exists in the physical world.  She shrugs off her mother's high-strung proclamations and Detective Willis's suspicious inquiries with the same level of carefully crafted aloofness.  Yet once alone, Camille struggles to maintain this false sense of detachment by drinking her past into another night of oblivion, hoping it won't end in another episode of cutting.

Sharp Objects promises to captivate us as we plumb the mysterious depths of murder secrets and shame.

Everyone's looking for true love amid the 1980s AID's epidemic sweeping New York, well - in the LBGT community, that is.  The buzz about this trailblazing series teased one thing but delivers something quite rare - a weekly drama centering on identity and fighting through personal fear to win a dream.

Each Pose episode highlights the ongoing catfight between two opposing 'families' that reign in the LGB - Transgender ballroom scene:  The long established House Abundance, led by Mother Blanca, a haute couture diva and the House Evangelista, began by Mother Elektra, a scrappy upstart offspring.  Their turf is a New York ballroom, where fabulous fashions sizzle on the catwalk for prizes, star status - and most importantly - personal validation.  But once off the runway, pain and longing pulse through every pore as the house members struggle to define themselves in a hostile society based on rigid heterosexual norms and racism, with mixed results.

Pose offers a dazzling array of characters to cheer on, from Mothers Blanca and Elektra to their ‘children': Evangelista kids Angel, Damon, Ricky and Li Papi, plus Abundance 'children' Lulu and Candy.  Ballroom Master of Ceremonies Pray Tell offers up sage advice and spicy repartee, acting as the balance between the two worlds of competition and life.  Rounding out the cast are the cisgendered players and haters - cruiser Stan, his estranged wife Patty, Stan's boss Matt Bromley, dance instructor Helena St. Rogers and sugar daddy Dick Ford. 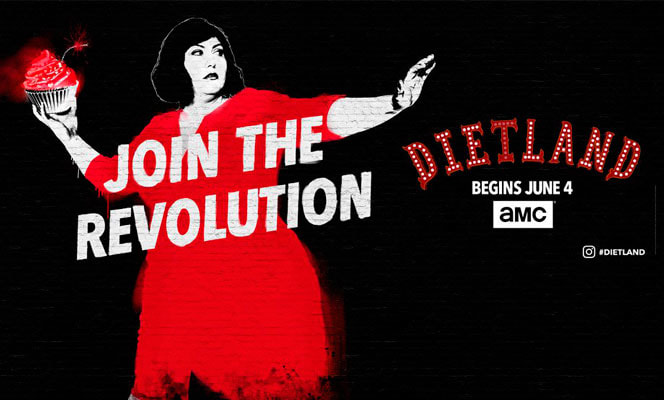 Based on Dietland by Sarai Walker

Dietland spins a tale about women who are mad as hell and won't take it anymore.  Alicia Kettle, aka Plum, an overweight ghostwriter, struggles to please - and appease - societal standards, her high maintenance boss and her thin alter ego.  Ghostwriting for teen magazine Daisy Chain's narcissist editor, Plum's job is to answer Kitty's mail from young readers about women's issues great and small.  Kitty - a coil of self-interest and unbound ambition (played to purrfection by Julianna Margulies) - strings along the eager Plum with visions of her own by-lined column, but it's clear that Kitty only cares about, well - Kitty.

Plum's job puts her in contact with Julia, a cosmetic queen by day and a resistance fighter after working hours, who makes good on her promise to shake things up in the feminist movement.  She begins to crush on Dominic, a tired private investigator who answers to Kitty but wants to know more about Plum's world.  Even her daily chats with cafe owner Steven quickly escalate their friendship into a mutual blame-game.

Plum has a love-hate relationship with the four main issues in every woman's wheelhouse - food, fashion, dating and appearance.  She dreams of transforming into a slim butterfly after undergoing gastric bypass surgery, so she enters Calliope House, run by former health guru, Verena Baptist, now turned progressive holistic healer.  If she can meet all the criteria for change she'll receive enough money to cover the hospital bill.  But Verena's agenda is more profound than any surgical procedure, as she challenges myths about dieting, love and the female image.  All that's left for Plum is to channel her proactive voice into...what?

Dietland provides a glimpse into what happens after the light bulb is lit for women, told from the twin extremes of calm reflection and frustrated rage.  Creator Marti Noxon ramps up the tension, pushing each episode from light comedy into a darker exploration of women's issues, the #MeToo movement and rapidly changing social trends.

After almost a century of stories told from a male-centric view, audiences - especially women - are feeling inspired by shows that celebrate our vision and encourage our collective voice.