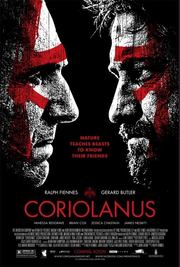 Written in the early 1600s by Shakespeare, the story is based on the life of Roman leader Caius Marcius Coriolanus. A naked tale of why citizens might embrace a fascist warrior leader, director and star Ralph Fiennes bring us a modern reselling of an old theme – war is hell – especially on its leaders.

Proud and hated by the local politicians, consul Coriolanus disdains the masses, “I’d rather be their servant in my way, than sway with them in theirs”. Vanessa Redgrave, as his mother, Volumnia, matches her son’s ambitious hell-bent plan for plan. The masses seem to be easily led by the politicians, first skeptical of his leadership qualities, then fervent approval, and then calling for his death and finally banishment.

Fiennes tepid production creates a lot of sound and fury, but this can hardly improve the lack of true cinematic excitement. The casting of nondescript supporting players weakens this tale and even his Coriolanus walks around looking pained, in both battle and in private. Gerald Butler is good as Tullus Aufidius, but his Scottish accent makes it hard to concentrate on his conflict. Dame Redgrave, is – as always! – a joy to watch onscreen. Unfortunately, she and Jessica Chastain are absent from most of this testosterone tale.

Maybe the director would have been wise to either lead as director or shine as the actor, for didn't Shakespeare himself say something about knowing when to exit?
COPYRIGHT 2012/2016. Paulette Reynolds.  All CineMata Movie Madness blog articles, reviews, faux interviews, commentary, and the Cine Mata character are under the sole ownership of Paulette Reynolds.  All intellectual and creative rights reserved.