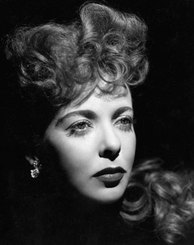 City Scene - Hollywood, 5:00 a.m. Front of the Kodiak Theatre. The street, once resplendent with red carpet photographers, movie stars, and carefully selected adoring fans have vanished, leaving only a faint echo of Award Show Season (ASS) perfume in the air.  But wait - in the distance, we can see a figure sitting in a director's chair, conferring with several people as the light barely works its way through the clouds. The back of the chair reads, "Mother of Us All",  and as we - or they - come into sharp focus, we see the great independent film and television director, Ida Lupino.

We wait for her to acknowledge us...tick tock...clearly she's too busy f---

"Well, come on now darlings! I haven't got all day - I need this light - please move the reflectors this way for Mum...good, good. Now, where was I? Oh yes, Cine told me you'd be by to - no! not that one, the large one! - oh, to ask my opinion about the Academy Awards?"

"Actually, I think she was hoping you could share your views about this award show season?"

Ms. Lupino turns her compact body to me, fixing me with a sharp , quick stare. "Award show season? Season? Who has time for an entire season?" Inhaling her cigarette in a few deep puffs, she appears preoccupied by a makeup assistant, hovering over B-list actress Mala Powers. "Darling - she's not going to prom, the woman just got raped, please, dear - muss up that hair!" The director who once called herself "the bulldozer" abruptly turns towards me. 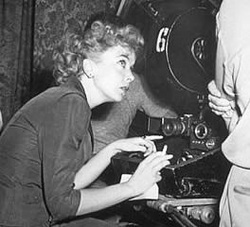 "Look, the big boys on the top floor decided - years ago - that ASS should be handled like any Hollywood property -- heavily handicapped in favor of their film projects and feature stars . So those movie and television 'zines like EW, People, and E!, together with their favorite critics target certain films, tv shows, and stars that the Hollywood Brass Boys want to win during the winter award season. ASS then becomes just another marketing tool to direct consumers into the movie theaters, DVD aisles, rental companies (Netflix, HULU), and cable On Demand channels, from November until late spring. By Oscar night, all the surprise has been squeezed dry and audiences are left with little more than an over-hyped musical fashion show."

"I had no idea you knew so much about the current film industry, Ms. Lupino."

The face that graced over fifty films - strong, with a cynical turn to her lips and a tough glint in her eyes - snapped a quick nod in my general direction. Often referring to herself as the "poor man's Bette Davis", Ida laughed. "Listen, I didn't get where I am today by acting like a decorated dodo. If you want to make it in this business, you'd better know how to play with the boys who run everything. Plus, I have an assistant who keeps me informed on all these social media and digital toys - I hate talking on the phone, as it is. Running your own production company and making films doesn't leave much time for texting or tweeting - Yes, thanks - Mother wants to run through that again, children!"

Feeling like I'm rushing to catch a high-speed jet, I attempt to get back on track, "What do you think of this year's winners?"

Ida lets out a bitter laugh, "Don't get me started, darling!  The ASS is just another Hollywood production, designed to steer audiences towards the Academy’s 'favorite winners' before the Academy's voting deadline. Since the 2014 Academy voting deadline was February 25, Academy members - mostly white males over 50 - (a lazy lot) simply voted for the winners announced at the Golden Globes on February 12 and the SAG awards on February 18. I mean we're talking about an industry that still can't nominate even a single female director for a damn Oscar!" 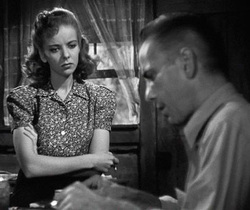 Noticing my shocked look, this talented director and actress - who was never nominated as either an actress or director - pats my hand.   "Remember Mother's words of wisdom about Hollywood - it's all an illusion - everything you see, read, or hear - is fake, false, and yes - totally fascinating."

I refer to my notes about the development of the award shows: When the Academy Awards were created 86 years ago, the mythology of celebrating cinematic creativity was born. The American film industry was flush with cash from the weekly 90 million film-goers, until the numbers began to dramatically shift with the advent of television in 1948. By then the Golden Globe awards had been honoring "outstanding achievements in film and television" for four years. Hollywood had to scramble to create more buzz to sell their films and related merchandise, so Tinsel Town embraced the new medium by televising the first Oscar show in 1953 and the Award Show Season was born. The formation of the BAFTAs in 1967, the Independent Spirit Film Awards in 1984, and the SAG awards in 1995 have joined the monolithic advertising machine that now gobbles up every facet of the global film industry - with Award Show Season as it's featured presentation. 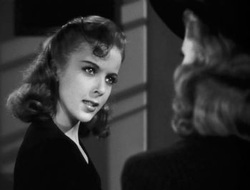 As the sun begins to climb higher, I'm aware that Ms. Ida Lupino's attention has narrowed to her set. Feeling dispirited by these cold facts, I ask her if she has any closing thoughts.

She gently laughs, allowing herself a moment of motherly indulgence, "Learn this dear, I was only the second woman to join the Director's Guild - I was known as the poor man's Don Siegel, for heaven's sake! I pushed my way in the door, learning the craft from the guys. Hell - I'd love to see more women working as directors and producers. Today it's almost impossible to do it unless you are an actress or writer with power. So nothing's changed in Hollywood, because women have allowed it to remain the same."

Looking at the rising sun, she barks towards her actors, "Darlings - Mum's in a bad spot, I want to get the camera over there." As Ms. Lupino turns towards me, I sense it's for the final time. "If I hadn't owned my own production company, it would've been difficult for me to direct. This glass ceiling that these new girls keep cryin' about is still there because they spend all their time bitchin', instead of doing it like the guys. What is that phrase I keep hearing? 'Put on your big girl panties, shut up, and get to work.' "

As Ida Lupino leans forward in her director's chair towards the set, she tosses me a final nugget, "Darling, I'm too damn busy creating to care if some old farts hand me a statue for my work - it's not even a genuine gold statue. That's Hollywood!"

Laughing, I take heart that someday my sisters in Hollywood will get the memo. 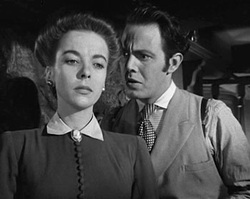 Note: Ida Lupino - actress, director, writer, and producer - carved out a successful career in film and television. As an actress, she usually played hard-bitten women who - like herself in Hollywood - took no prisoners and suffered no fools. Her acting credits include such gems as High Sierra, They Drive By Night (my personal favorite - featured on the NOIR GREATS page), Ladies in Retirement, The Hard Way, The Big Knife, Hard, Fast, and Beautiful. Ms. Lupino's films as a director leaned towards low budget film noir and B thrillers, like Outrage, The Hitch-Hiker, and The Bigamist.

Often described as a pioneer in her craft, Ida Lupino examined female-driven themes that included rape, unwed mothers, bigamy, codependency, and other social issues. She acted, wrote, directed, and produced her own films through her film production company, The Filmakers. Like her male counterpart, John Cassavetes, Ida actively worked on the small screen to help finance her films, as both an actress and guest-director. *