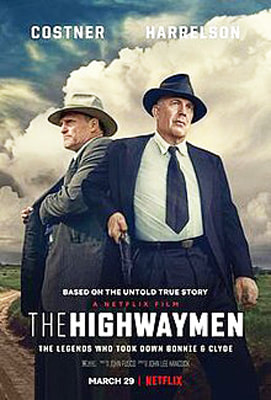 Starring Kevin Costner/Frank Hamer, Woody Harrelson/Maney Gault, Kathy Bates/Gov. Miriam "Ma" Ferguson, John Carroll Lynch/Lee Simmons, Thomas Mann/Ted Hinton, Dean Denton/Bob Alcorn, William Sadler/Henry Barrow, Josh Caras/Wade McNabb, Emily Brobst/Bonnie Parker, Edward Bossert/Clyde Barrow
Hollywood has a love-hate relationship when it comes to historically based films - they love to play with the facts and hate sticking to the truth.  Nowhere is this more evident than with the Warren Beatty/Arthur Penn 1967 version of Bonnie and Clyde.  The film went down in Hollywood history as ushering in graphic violence and bloodshed, wrapping the pair (Warren Beatty as Clyde and Faye Dunaway as Bonnie) in a faux New Wave brand of romanticism and fetishized glamour.  Their murderous trail was softened with a folksy country soundtrack and the police were portrayed as stiff redneck buffoons that Barrow and Parker could easily evade, capture and manipulate.  The media and film critics of the period went a long way in shaping the populace narrative, until it was difficult not to feel sympathy for the Barrow gang and the two young bank robbers. 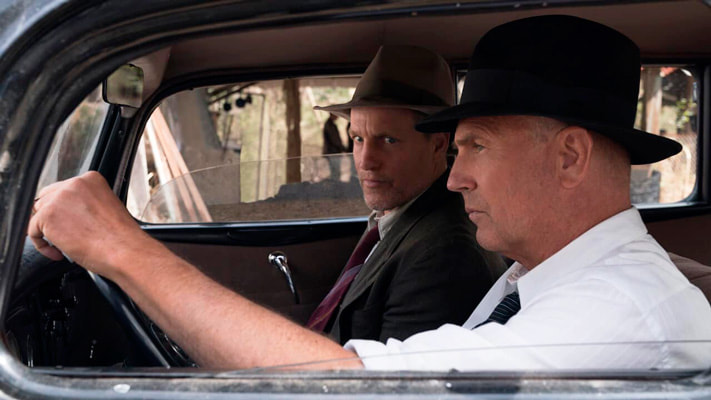 The Highwaymen proves that Hollywood still can't let go of embellishing the truth, but this time the pendulum swings in the opposite direction.  There is no glamour or romance and the deaths are what they usually are: cold bodies lying in a pool of blood, the victims silently staring at the vast sky.  Cinematographer John Schwartzman shoots a landscape that reflects the flat, emotionless faces of small town citizens, quietly waiting for the hard times to be over.  Bonnie and Clyde are shown in cold and calculating deeds, but with their backs facing us, as though we're peering at a forbidden act.  The film labors to show Parker as a methodical killer, but uses what suspiciously feels like faux facts to conform to the Texas Ranger’s records. 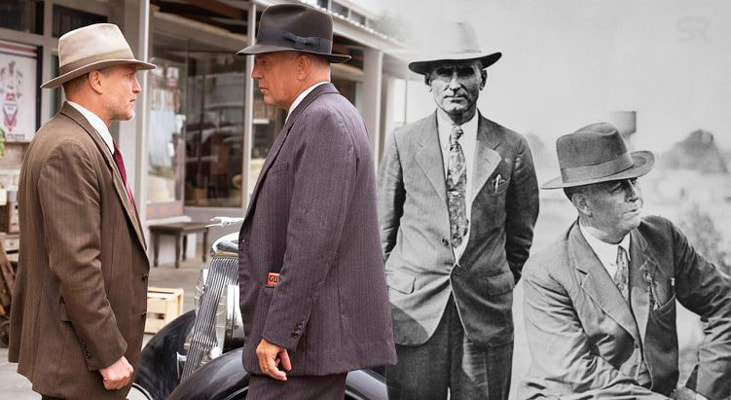 Former Texas Rangers Frank Hamer and Maney Gault are brought out of retirement to assist in the manhunt for slick bank robbers Bonnie Parker and Clyde Barrow.  Sitting on their respective porches listening to the grass grow, their reluctance to once again enter the fray is only superficial.  It seems that the passage of time has only primed them for their most dangerous assignment.
The deadly duo of Bonnie and Clyde cut a rough road through the south during the Great Depression, killing nine police officers and four citizens, while taunting law enforcement in newspaper articles showcasing Clyde's homespun wisdom and Bonnie's desolate poetry.  Along the way, the lovebirds became infamous as working-class heroes, striking a blow at the hated system of Commerce that ground a nation of farmers into the parched earth.

This pursuit is told from Frank and Maney's point of view: spare, sparse and tart, as the two old friends reweave the remnants of their tattered friendship.  Costner's Frank Hamer is a tightly controlled coil, whose silent demeanor only chafes Woody Harrelson's motor-mouthed extrovert in all the wrong places.  But make no mistake, they act in perfect harmony with the situation calls for it.
Which chronicle is more accurate?  It hardly matters, really, but for my money a small, wonderfully self-contained performance by character actor William Sadler (as Clyde's father) encapsulates what might have been the general feeling of those closest to the Barrows. "You're not hearing me, mister.  I'm trying to say something.  It ain't easy for me to say.  I know there's only one way that this thing is ever gonna end.  And I'm asking you, please...just end it now, damn it.  End it for my family." 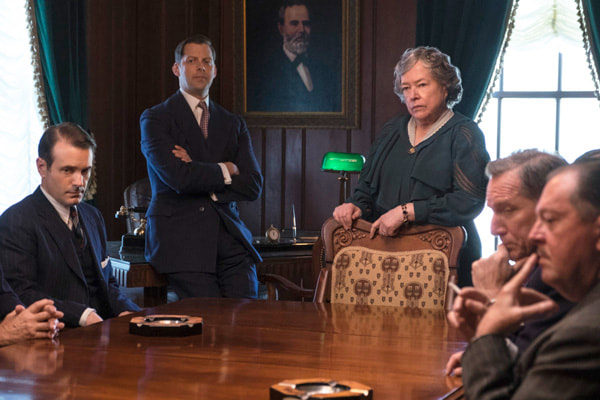 It's a real treat to enjoy the talent in this film:  The latter part of Kevin Costner's career has given us some fine characters in a similar vein to Frank Hamer, most notably his 2003 portrayal in Open Range as cowboy Charley and as Devil Anise Hatfield in The Hatfields and McCoys (2012).  Woody Harrelson became a real surprise for me as his resume sparkled with roles in season one of True Detective (2014), LBJ (2016) and Three Billboards Outside Ebbing, Missouri (2017).  And Kathy Bates as the steely-voiced Gov. Miriam "Ma" Ferguson is a welcomed addition, providing another historical figure that was absent from the 1967 interpretation.

Watching both films is like opening a treasured history book on the creative nature of filmmaking.  The Highwaymen and Bonnie and Clyde demonstrate how each successive era can retell a well-known story from a different perspective, and in the retelling, play on our emotions and reshape our opinions.  Luckily, social media and the internet can now act as a reality check, long after the story is over and our pulse rate has returned to normal.
Photo Credits:
Bonnie & Clyde: 13 Things You May Not Know About This America's Most Infamous Outlaw Couple . (March 12, 2016)
https://www.vintag.es/2016/03/bonnie-and-clyde-13-things-you-may-not.html