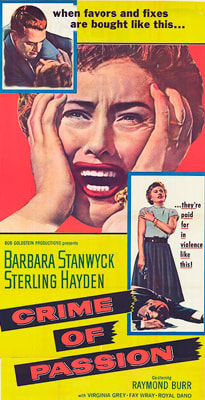 
Starring Barbara Stanwyck/Kathy Doyle, Sterling Hayden/Bill Doyle, Raymond Burr/Tony Pope, Fay Wray/Alice Pope, Virginia Grey/Sara Alidos, Royal Dano/Charlie Alidos, Robert Griffin/Det. James, Dennis Cross/Det. Jules
​by Paulette Reynolds
August 5, 2020
Crime of Passion may feel like a tale about an independent newspaper woman who impulsively marries a cop, gets bored with being a suburban housewife and meets a bloody end.  Sure it is, but the narrative of any film - or any story, for that matter - contains two themes.  One grabs our attention and holds it, so we almost forget about the more compelling - and often subversive - subtext.

The first twenty minutes shows a contemporary look at women's issues, as the story sets up the impending conflict between a woman's cherished goal verses 1950s societal expectations.  Kathy Ferguson is perfectly happy working as a women's newspaper columnist.  When she’s not taking up the woman’s cause she’s smartly dodging her boss’s remarks or squashing a coworker's query about marriage.  Kathy’s passion is breaking through that glass ceiling while looking for stories that will further those career dreams. 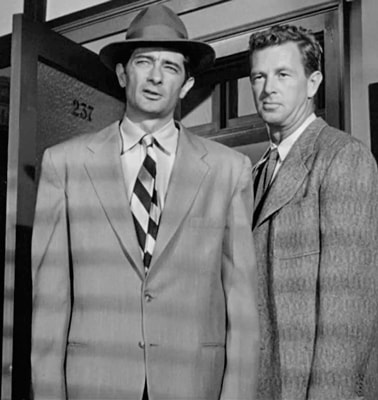 Angered by the hostile words of a visiting Detective Alito, "Your 'work' should be raising a family and having dinner ready for your husband when he comes home," she writes a column to a female murder suspect, urging her to give herself up to our fearless reporter. ​
Her female readers eagerly read the fiery column, immediately understanding Kathy’s universal call.  "Women tortured by fate, betrayed by all men...Where can we turn, except to the heart and understanding of another woman, who knows what you're suffering?  Let me stand by your side, in a world made by men, for men..."

But life throws Bill - Alito’s partner on the case - into Kathy's path, just as she gets that dream job offer on a large New York newspaper.  Flash to dinner, a quick wedding and in a snap, our fearless reporter - now Mrs. Kathy Doyle - is neatly tucked into her very own ranch style house, living up to Detective Alito’s prescription for a woman. ​ 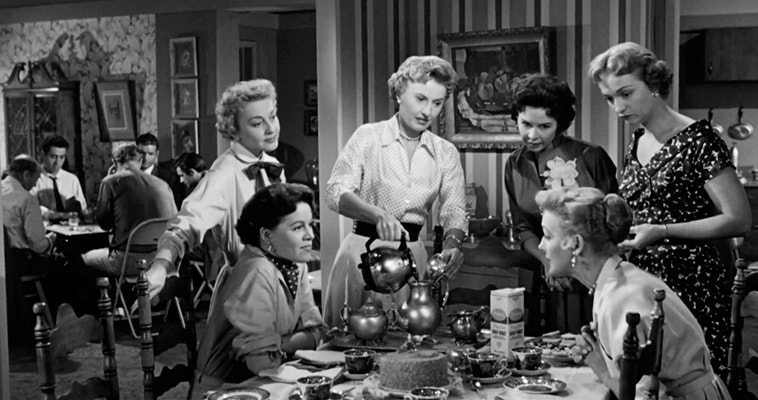 A montage of dinner parties underscores the new paradigm for Mrs. Doyle, where the men engage in robust discussions about work and politics and the women chatter competitively about food and fashion.  She's being buried alive and there's a moment when the film pauses for us to wonder...will Kathy decide to go back to work?  Put on her pearl necklace and become a Stepford wife?  Try to encourage these women to step outside of their one-dimensional lives? 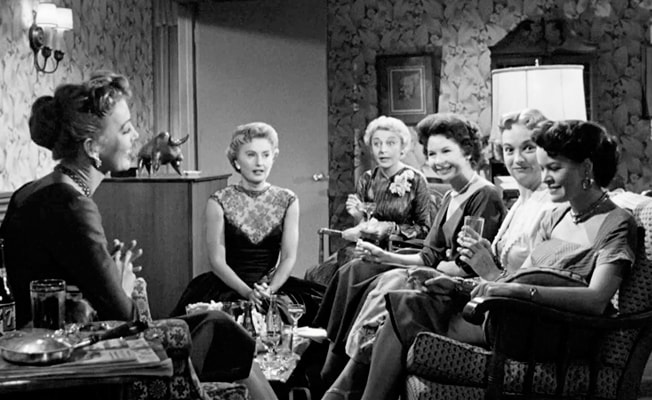 ...And the meaningful moment quickly vanishes, because Kathy made a vow to love, honor and obey her husband.  The real crime here is teasing the female viewer with the promise of a progressive story, only to be sabotaged by Hollywood’s overt conservative agenda.  Crime of Passion soothes the American post-war male gaze by forcing Kathy to stifle her angst and plot her husband's pathway to success. 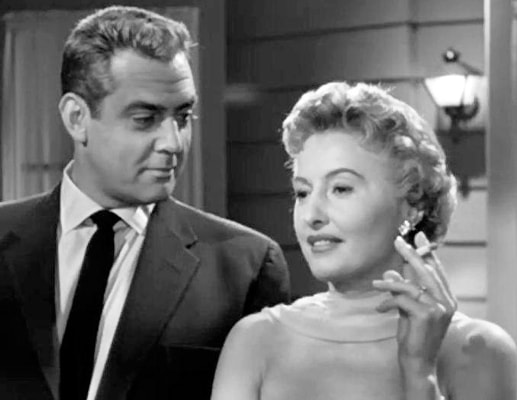 Barbara Stanwyck and Raymond Burr dance around this B noir paradigm, their performances crackling with a promise that never quite delivers.  But Burr fascinates us with his pre-Perry Mason qualities that would go on to make him a television icon.  By the time Crime of Passion was released, his career would take a dramatic turn, and we're left marveling at his warm, rich voice and commanding presence.  Sterling Hayden mopes about under the weight of Bill Doyle, stuck in an endless cycle of comforting his wife and fleeing into the safe haven of work.
This too, was a wake-up call for Stanwyck, who would flirt with a few more movies before settling into TV's The Big Valley.  Her performance as the energetic and sassy singleton Kathy Ferguson, gets worn down and then twisted into the chaos of Kathy Doyle; hurling herself from one crisis to the next, hoping to forget that she made a bad life choice.  By the film's end, she can barely speak, drained and devoid of any passion for her life. 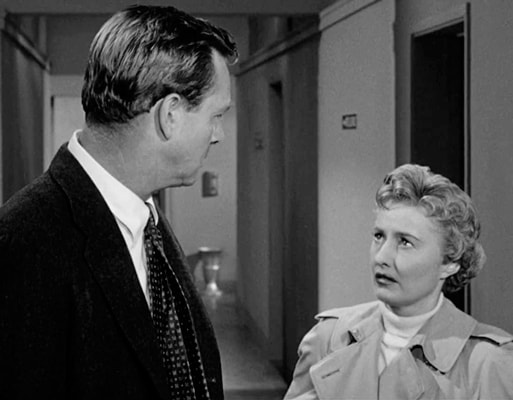 It's left to Bill - representing all men who felt threatened by the emerging empowered woman of the 1960s - to punish her by getting the last word.   "I'm the same copy, Kathy, the same cop you met in Frisco, the same cop I was ten years ago, pounding a beat - the same cop.”  See?  Bill’s needs are simple - wife at home with dinner on the table - and then we realize that Bill is just as trapped in this hell as Kathy. 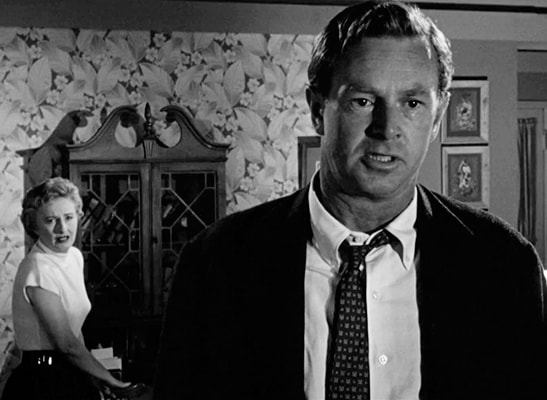 Crime of Passion's production team included a healthy dose of women:  Majorie Fowler (Editor), Verna Fields (Sound Effects Editor), Jill Campbell (Music Dept), Grace Houston (Costume Design) and (Script Supervisor) Mary Gibsone.  And as the final credits rolled, it seemed that the little woman was already shrugging her shoulders and continuing her climb up that ladder - at United Artists, that is.

Stanwyck’s descent from career gal to hardened femme would signal the end of the iconic feminist trope in cinematic noir.  The Femme Fatale’s popularity made characters like Kitty Collins, Bridget O’Shaunghnessy, Kathy Moffat and even Stanwyck’s Phyllis Dietrichson fascinating to watch.  These fiercely independent people used their sexual power and sharp wits to get what they wanted, leaving behind a bloody trail of bodies, broken men and little regret.

​By the 1960s women were scrambling to flee the suburban nightmare for jobs, college and the picket lines.  In a world “made by men, for men”, the Kathy Ferguson Doyle’s of America finally decided to write their own narrative. 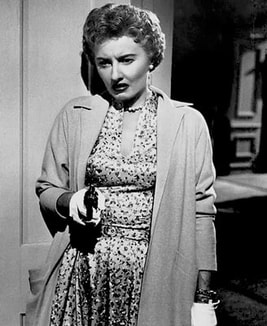