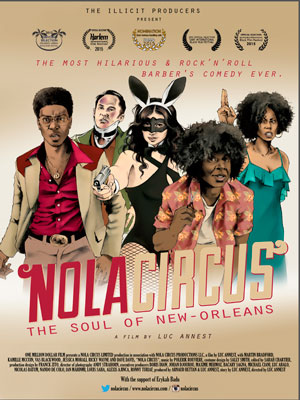 Circus: Noun. A situation or event that is very busy, lively,
​     and confusing and that attracts a lot of attention.
Merrimack-Webster online dictionary 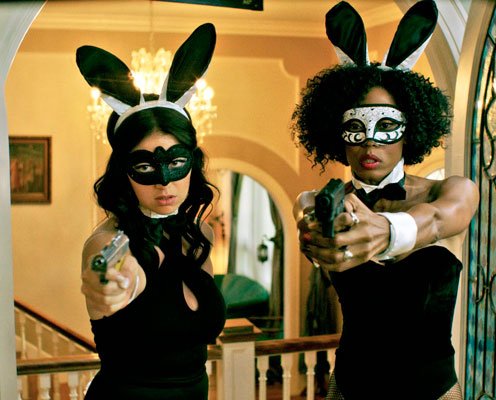 Usually we associate a circus with the innocent days of our youth, where our parents would take us to see performers and animals, clowns and spectacular displays, guaranteed to leave us breathless.  But now, thanks to the magic of the independent film, we can see a bonafide three-ring urban circus, courtesy of Nola Circus, directed and written by Luc Annest.

Every circus has its rather large and unwieldy cast of characters and Nola Circus is no exception.  Barbershop owner Will and his girl friend Nola just want to celebrate their love without any drama, but they're surrounded by a three-ring circus of quirky characters who thwart them with every embrace.
Nola's rageaholic, possessive brother Denzel prowls the streets with his white Afro, looking for stray pizza delivery men to beat up (It's a long story).  Marvin and his crazy crew at Marvin's Barber Shop think of goofy ways to mess with Will's growing salon (Which includes - aw forget it - it's another long story!).  Giuseppe's Pizza Parlor is the scene of another group of misfits, endlessly plotting ways to get back at Denzel for...You guessed it, an even longer story! 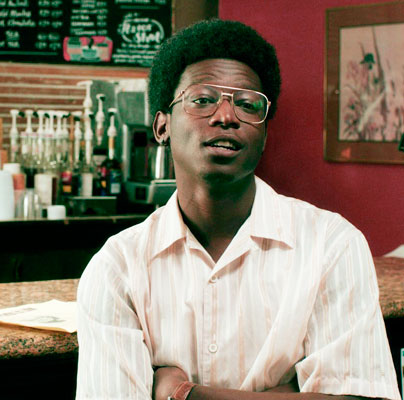 Nola Circus brings to life a sleepy corner of Algiers Point in New Orleans, filled with love, sex, raunchy language and laughter.  The multi-ethnic cast of Will, Nola, Denzel, Karen (the Pill Pusher), Enzo (the out of town enforcer), Giuseppe, Vinny, and Marvin keeps the action on hyper over-drive; with a rocking soundtrack by Polerik Rouvière.  Be prepared to enjoy this  comedy extravaganza - and if you're easily offended - remember, it's a comedy circus, not high drama on PBS.
COPYRIGHT 2012/2018. Paulette Reynolds.  All CineMata Movie Madness blog articles, reviews, faux interviews, commentary, and the Cine Mata character are under the sole ownership of Paulette Reynolds.  All intellectual and creative rights reserved.