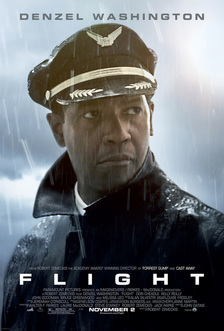 
Denzel Washington stars in Flight, another predictably perfect movie directed by Robert Zemeckis. Alcoholic pilot Whip Whitaker (Denzel Washington) stumbles to work one morning, settles into his seat, hits back some oxygen and vodka, and successfully commandeers a defective airliner to safety after a rough-and-tumble flight.

It’s easy to see that the flight of the title represents Whip’s life, literally flying out of control. Additional symbolic elements pile up, one after another, almost bordering on the absurd, until we want to yell out, “Yes, he’s spiraling downward – I got it!” And just as clearly, we know that this is a story about one man’s descent, refusing outstretched hands offering help, until he hits rock bottom. Screenwriter John Gatins definitely knows his subject, but seems content to create a one-dimensional recovery movie – complete with Alcoholics Anonymous, meetings, the blue book, sponsors, and the Serenity Prayer.

Don’t get me wrong – Flight is a solid film about redemption, but it rings hollow, because it leaves out the reason that Whip drinks. Yes, we know that often there’s multiple reasons for addictive behavior, but one recalls an insightful recovery movie in Billy Wilder’s Lost Weekend. This Academy Award winner made it clear why Don Birnam (Ray Milland) drank, which made us care more about the central character’s road to redemption. Denzel Washington’s Academy Award nominated performance is well-deserved, but it’s neither memorable or inspiring.

However, Gatlins nails the enabling quality of society in Don Cheadle’s Hugh Lang, the skilled union lawyer who sees getting Whip off as just another day on the job. John Goodman serves up comic relief as Whip’s bombastic drug dealer and Kelly Reilly delivers a touching performance as a recovered addict.  I watched this film with a seasoned flyer, and the special effects during the disaster sequence made her sing the praises of the road trip via automobile.
COPYRIGHT 2012/2016. Paulette Reynolds.  All CineMata Movie Madness blog articles, reviews, faux interviews, commentary, and the Cine Mata character are under the sole ownership of Paulette Reynolds.  All intellectual and creative rights reserved.