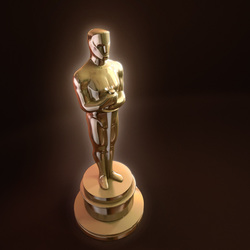 The Golden Globes usually kicks off the award show season (yes, the People's Choice starts it, but who really counts it among the serious award show contenders?) and serves as the litmus test for the two months of madness.   Most Hollywood-related blogs and columns focus their predictions at the beginning of the award season and gush non-stop during the glitterati red carpet rush-crush of Oscar. This article is not one of them.

My 50 years viewing experience has proven two sad facts when it comes to diversity in Hollywood. Before the award season gets too crowded on the red carpet runway, let me make two major predictions:

1. Hollywood is one big tinsel-town Plantation: Few if any black industry actors/actresses will be nominated and 99% will never win.

The only winners from a Best Picture nod are the studio and producer(s), with the director and screenwriters getting a gold star for their resume. This is Hollywood's version of a consolation prize to the ethnically-diverse community. A pat on the head, a wink to the money-men, and off to the after parties with ya! It's a bitter Catch-22, since the Golden Globes highlights both film and television, and TV is the the most diverse entertainment venue for women, minorities, and the LGBT luminaries.

The statistics for the Academy Award's 86-year history is even more depressing: Best Actor nominations has had 13 males and four wins / 10 female with one win. For Best Supporting Actor, 13 men nominated with four wins and 18 women with five wins.

2. Hollywood is one big Men's Club for directors: Even less women directors are tapped at nomination time and therefore almost 99.9% never win.

The history of Golden Globe nominations for female directors is dismal, to say the least, with six women nominated since 1980 and only one win for Barbra Streisand's Yentl. The Hollywood Foreign Press takes its cue from their cronies at the Academy of of Motion Pictures Arts and Sciences: Kathryn Bigelow marks the only win in 86 years of the Academy Awards, with only four female directors ever nominated!

Now, with the "Press" and the "Academy" voting, one would think that the liberal and diverse entertainment industry would reflect its population at awards time. Sure, if the rank-and-file members voted and if the award shows were truly democratically decided. The glaring fact is that the scant nominations and slim wins indicate that the white boys calling the shots are, well - calling the shots. This would explain why there are so few A-list stars of color, why there are even fewer women directing, and even less notables winning at award time.

A Los Angeles Times study in 2012 present some stark stats:


Ah, but wait! It gets better:


The Oscar show is fond of hauling out the PriceWaterhouse[Cooper] auditors, complete with handcuffed briefcases, stuffed with "sealed" envelopes of winners. But really, like the Hollywood they serve, they're just props in the smoke and mirrors show that is Award Season, because every winner is chosen beforehand - and not by the voting process.

Yet, with each year the Academy Awards has its  low points, with female directors still shut out, Cate Blanchett's venomous acceptance speech, the misuse of product placement during showtime, Jimmy Kimmel's attack on working-class viewers, and Ellen's lack of good taste towards Liza Minnelli.  Add to this that we still must sit through a four hour show - on a Sunday night - watching sound mixers and editors saying, "thank you".  Ah well, "That's Hollywood!"