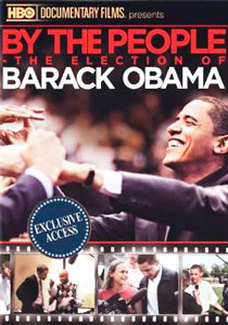 By the People:
the
Election
of
Barack Obama

Released in 2009 shortly after the presidential election, this film falls somewhere in between political propaganda and an amateur film diary. Directed by Amy Rice and Alicia Sams and produced by actor Edward Norton, this HBO documentary presents a one-dimensional view of the 2008 presidential election between Barack Obama and John McCain.

Given that 98% of Hollywood is liberal, it was inevitable that a movie about Barack Obama would be made…but couldn’t By the People at least be entertaining or enlightening? Apparently, Rice, Sams, and Norton, et al, didn’t think so. With unlimited funds and talent at their disposal, People boils down to a tunnel view of the campaign, and its supporting cast of star-struck campaign workers, mainstream media, and huge crowds of enthusiasts.

At the forefront is Obama, who appears to play to the camera like a star-struck kid, enjoying every moment of the branding that is Mr. O. The “behind-the-scenes” glimpses are just as carefully staged as Candidate Obama’s many appearances, staff conferences, and his off-hand comments such as, “I love elections, they’re so much fun!”. No – really!

The film lacks any narrative style – and any narration, for that matter - and the audience is left to plow through almost two hours of wall-to-wall film footage of this sticky-sweet homage to the perfect Liberal candidate. Without showing the reality that goes into every political campaign or exploring Obama’s crafted image, By the People comes off as a back-handed tribute to Leni Riefenstahl’s Triumph of the Will's cinematic design.

Six years later and OHLand can’t help but wonder if Rice, Sams, and Norton, now well-tempered by time and stark reality, would package their product a bit differently.