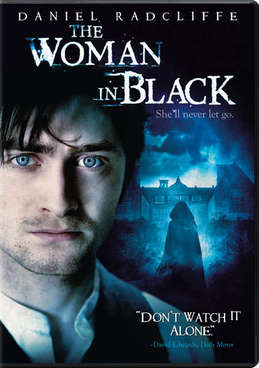 
A sad, atmospheric tale, starring Daniel Radcliffe, Ciaran Hinds, and Janet McTeer, The Woman in Black takes us back to an era of movie-making sans props and special effects. The sparse dialogue, shadows, and creaky sounds prove we can still get pulse-pounding scared in the good, old-fashioned way as British horror films always delivered.

Radcliffe plays British Arthur Kipps, a young lawyer, recently widowed, who must leave his son to transact business in a remote village during the Edwardian period. The townspeople are a grim lot, desperately clutching their children at every turn as Arthur makes his way to the cursed mansion of Eel Marsh. He’s quick to surmise that something odd and forbidding has an unrelenting hold on the doomed town and its inhabitants.

Kipps spends much of the film tracking down muddy footprints and distraught voices in the mist; frustrated by a hostile village hell-bent on keeping its secrets, refusing to give in to the belief that the woman in black’s curse can’t be undone.

Janet McTeer gives a tortured performance as Elizabeth Daily, the clairvoyant wife of the local landowner, Sam Daily. Radcliffe is solid as Arthur – who is one brave ghost-hunter – but director James Watkins gives Radcliffe’s Arthur little to do except react, rather than act; something that was left for the more seasoned Hinds and McTeer to do. Perhaps this is the curse of young actors who become successful in blockbuster film franchises, although Radcliffe’s stage performance in Equus earned him two awards and would suggest he has more depth than the character – or Watkins directing – allows to surface.

Cuddle up with a big bowl of popcorn, your significant other and remember – keep the lights on!
COPYRIGHT 2012/2016. Paulette Reynolds.  All CineMata Movie Madness blog articles, reviews, faux interviews, commentary, and the Cine Mata character are under the sole ownership of Paulette Reynolds.  All intellectual and creative rights reserved.