The Neo-Renaissance Movement
in Women-Centered Television

April 26, 2017
I'm returning to a favorite theme of mine - why people aren't going to the movies.  The big boys in Hollywood are content to play dumb about it, but the simple truth is that the Small Screen simply isn't small anymore.  It's enjoying a big, bold and brilliant entertainment renaissance that leaves the Big Screen dark and inconsequential, as it tackles large themes while serving up the diversity that Tinsel Town refuses to deliver.  Two of the best hits from the 2017 season, Feud: Bette and Joan and Big Little Lies, leave the big screen firmly in second place.
With it’s season finale reaping praise for Feud: Bette and Joan, FX neatly carves out a top spot for creative take-no-prisoners programming. The eight-part series focused on the clash between two Hollywood heavyweights, Joan Crawford and Bette Davis, during the shooting of their now high camp tour-de-force, What Ever Happened to Baby Jane?  Jessica Lange and Susan Sarandon head an all-star cast as the silver screen legends who dominated Hollywood, despite being consistently low-balled by the studio bosses.
The personal and professional history of these twin iconic Hollywood queens not only gives us a glimpse behind the veil of glamour and illusion, but also reveals how little has changed for women artists in Tinsel Town.  The Dream Factory long ago established the unfair - and illegal - labor practices that form the backbone of today's gender discrimination for Hollywood's female actors, writers, and directors.  The issues of wage disparity, hiring practices based on age, appearance and gender are openly condemned by the characters - a sad irony that continues to this day.
Jessica Lange channels Joan Crawford and elevates her almost to heaven, but leaves enough room for us to recognize a woman running scared for her diminishing career.  Susan Sarandon's Bette Davis struggles to move beyond the iconic caricature, yet hits enough of the right high notes to satisfy even this diehard Davis fan.  Judy Davis is simply fabulous as the cunning Hedda Hopper, who can turn on the compassion at just the right moment to get what she wants.  Alfred Molina delights as director Robert Aldrich, whose mood swings take flight as he gets caught between the battle of egos, deadlines and a rapidly fading marriage.  And of course, Stanley Tucci soothes everyone's bruised feelings as studio mogul Jack Warner.
Kathy Bates and Catherine Zeta-Jones deliver strong performances as themselves, but not as Shelly Winters and Olivia De Havilland.  Jackie Hoffman earns a Best Supporting Actress nod for her tart Mamacita, who stoically cleans up Crawford's messes with her now famous withering stare.
Co-creator and executive producer Ryan Murphy is no stranger to women-centered television, as his American Horror Story and Scream Queens are still top FX series that consistently highlight strong female ensembles.  He launched his Half Foundation in 2016, with the goal of providing and promoting women directors on his projects by 50%.  Such action saw four of the eight Feud episodes directed by women : Helen Hunt, Gwyneth Horder-Payton and Liza Johnson - and many of the speaking roles went to actresses over that “certain age”. 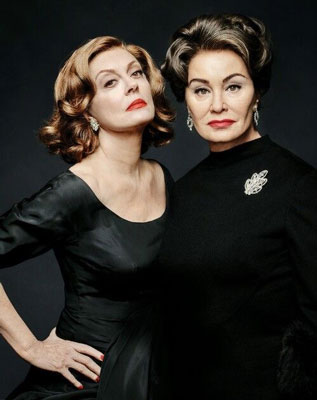 The Emmy-worthy production featured drop-dead fabulous costumes and sets that helped establish the Hollywood milieu, sizzling scripts and fresh direction.  Graphic Designer Kyle Cooper created the dramatic silhouette artwork for the main credits, which was first pioneered by silent animated film director Lotte Reiniger, in 1926, for what is now the oldest surviving full-length animated film, The Adventures of Prince Achmed.

What makes this creative project so inspiring is not only the effort that went into guaranteeing diversity and fair hiring implementation, but the commitment to crafting a strong female-driven storyline.​
Another example of women-centered drama on television is HBO’s Big Little Lies.  This limited series again highlights what is lacking in most of today’s films about women.

Reese Witherspoon, Nicole Kidman, Shailene Woodley, Zoe Kravitz and Laura Dern head a large ensemble cast that seamlessly weaves a truly ingenious Who-Done-It plot, while tackling many hot-button issues of domestic abuse, date rape, child abuse and adultery.
Set against an affluent Big Sur community, Big Little Lies follows five women - four married and one single mother - as they struggle to maintain their own authenticity within the shallow and petty confines of their pampered environment.  When one person is found dead during a neighborhood get together, we’re treated to a look back on the central events leading up to its fateful conclusion.
However, writer David E. Kelley, director Jean-Marc Vallee, and co-producers Reese Witherspoon, Nicole Kidman, Barbara A. Hall and Liane Moriarty (author of the book) allowed Big Little Lies to suffer from taking the easy way out.  They stereotyped the male characters as one-dimensional caricatures, perhaps in the mistaken belief that it would make their female characters look more empowered or victimized.  And they created a school environment that bears little resemblance to reality, all for the sake of a major plot point. 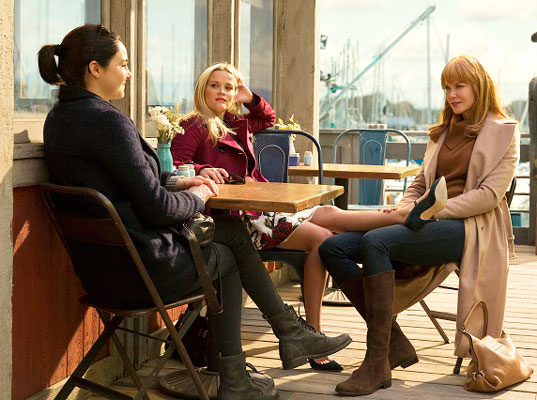 But we can forgive these transgressions, as Big Little Lies accomplish some fine dramatic moments.  The series never feels like a cheap soap opera and it manages to soar above some of the more trendy HBO programming.
As the Hollywood film industry continues to deny women artists employment opportunities behind the camera, their decades-old fear about television seducing viewers away from the multiplex appears to be doing just that - for one half of the American population, anyway. ​