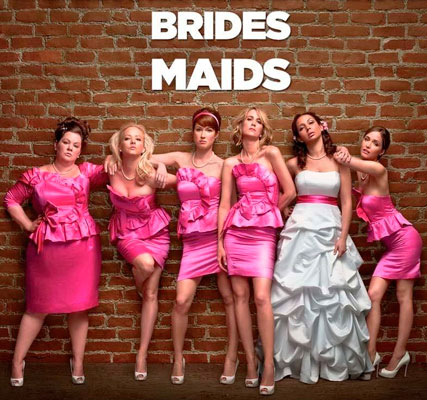 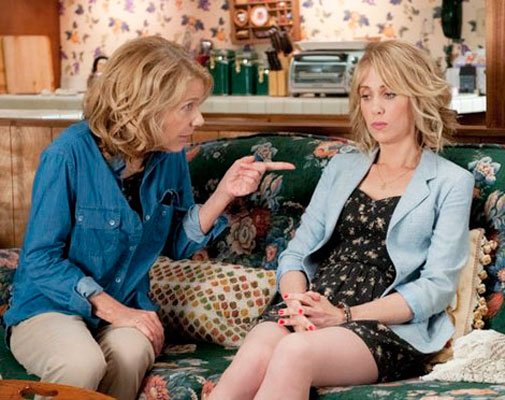 ​There’s a pivotal scene in Bridesmaids, where Jill Clayburgh (in what would be her last film), hugs her daughter, Annie (Kristen Wiig), an Everywoman who haplessly struggles through a series of events that is her one-dimensional life. That Ms. Clayburgh carved out a successful career mastering such roles is not lost on this reviewer; and the hug serves as a symbolic passing of the torch, so to speak. In this fleeting moment, Ms. Clayburgh hands over the mantle of Woman Who Searches (for her empowerment in all the wrong places) to promising newcomer Kristen Wiig.
Borrowing a few pages from the buddy film genre playbook, Bridesmaids popularity signaled a new type of click flick - smart, sassy, and not content to play it safe. Male co-producer Judd Apatow and director Paul Feig translated a fearless feminist screenplay that pushes this women’s film to the curb with more swearing, a hilarious scene with poop and puke in a bridal shop, and a plane trip that mixes treachery, girl-on-girl tonsil hockey and Melissa McCarthy’s leery come-ons. Bridesmaids was not a safe haven for cute dialog and polite sentimentality, but served as a blazing torch for more women's films to be produced, especially by women.
The plot focuses on Annie, played by Kristin Wiig, Living with a bizarre pair of siblings with boundary issues (from the UK’s Little Britain) and trying to prop up her sagging love life with a boring stud-muffin, Annie serves up an honesty that tap dances on our last nerves. The verbal window into her soul is her painfully self-conscious, unedited Tourette-like musings that seem to kick in at all the wrong times. Working in a high-end jewelry store, she can’t help but blurt out her misanthropic views on the store’s “love is eternal” ad campaign by emphatically asserting that, “no it doesn’t” usually last. So, naturally, the universe taps our cynic to be the Maid of Honor at her best friend’s wedding.
Annie is expect to organize Lillian’s bridesmaids, who she tags as “a stone-cold pack of weirdoes”, into a cohesive wedding team, ever-ready to support bride-to-be, Lillian, through the bridal shower, wedding ceremony, and reception madness. The challenge for our Go-to-Girl is that she’s clueless on how to whip wild-card Megan (McCarthy), uptight Helen (Byrne), loose lips Rita (McLendon-Covey), and unassuming Becca (Kemper) into a cohesive bridal party. During a cute face-off with social-climber Helen, it becomes clear that she covets Annie’s new-found status and decides she’s the best person for the job – by hook or by crook.
This Chick Flick Gone Wild was also a break-out vehicle for Ms. McCarthy, who plays Megan, as the feminine counterpart to buddy film star Seth Rogan. With such lines as “I’m your shitty life and I’m biting you in the ass”, McCarthy’s Megan proves that we’ll be seeing more of this talented actress (and newly-minted Emmy winner) on the big screen in the near future – and it’s about time!
*  Updated February 16, 2016.  Originally written for Outside Hollywoodland, November 2011.
COPYRIGHT 2012/2016. Paulette Reynolds.  All CineMata Movie Madness blog articles, reviews, faux interviews, commentary, and the Cine Mata character are under the sole ownership of Paulette Reynolds.  All intellectual and creative rights reserved.