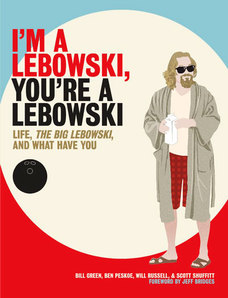 
by Bill Green, Ben Peskoe, Will Russell, and Scott Shuffitt

This is a book that celebrates The Dude, Walter, Donny, a bowling alley, and a rug that ties it all together.

I'm A Lebowski is not for anyone who's seen the Coen brothers cult classic, The Big Lebowski. WTF?! Sigh, that's because Big Lebowski fans have already added this book into their ever-growing Lebowski library.

"It's like what Lenin said... you look for the person who will benefit, and, uh, uh…"

No, this book is for neophytes, those who have never been introduced into the alternate reality that is The Big Lebowski. Created in 1998, an unforgettable cast, unsteadily lead by Jeff Bridges, brought to life a script by Joel and Ethan Coen about a trio of bowling buddies (Jeff Bridges, John Goodman, and Steve Buscemi) trying to focus their attention on an upcoming bowling tournament. Along the way a soiled rug and a kidnapped trophy wife threaten to derail their strict training regime of White Russians, Shomer Shabbos, and the occasional acid flashback. Directed by the Coen brothers, The Big Lebowski went on to inspire quote-a-thons, festivals, merchandise, numerous philosophical essays, a Dudeist religion, and of course - books about the Dude.

Although I'm A Lebowski is clearly written for the cast-iron Lebowski initiate, novices will be introduced to Dudeisms, history, and lore that surrounds the world of the Dude, Walter, and Donny. Interviews with the entire cast provides a glimpse into the creative process of the notoriously reticent Coen brothers. References to the most popular lines, memorable scenes, and pop trivia will keep you up long past your bedtime.


"I'm sorry I wasn't listening, can you repeat that?"

My only criticism is one that befalls too many filmography books currently being published, namely, that the photos are drab and muddy. Since this is a book about a visual medium, it detracts from the overall experience. Sadly, Bloomsbury, the publishing company, was too willing to sacrifice quality for the bottom line of profit. The irony here is that if the visual integrity of the graphics are high quality, then more copies of the book would be sold.


"Has the whole world gone crazy? Am I the only one around here who gives a shit about the rules? Mark it zero!"

Of course, watching the movie before reading I'm A Lebowski will adequately prepare you to fully enjoy I'm A Lebowski - but then, isn't that the whole purpose of buying a book based on a movie anyway? Afterwards, this book will deserve a hallowed place among your Creedence tapes, weed, Kahlua, and preferably near, but not touching, your bowling ball.

And remember the sacred words that Walter spoke to The Dude in times of duress, "Fuck it Dude, let's go bowling."


Green, Bill, Peskoe, Ben, Russell, Will, and Shuffitt, Scott. I'm A Lebowski, You're A Lebowski : Life, The Big Lebowski, and What Have You. New York: Bloomsbury, 2007.  Print