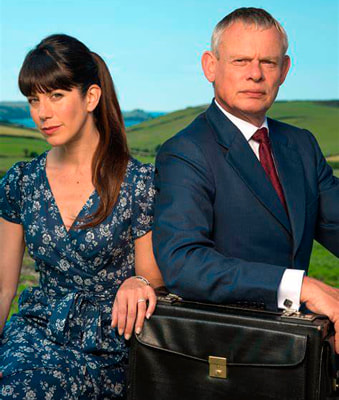 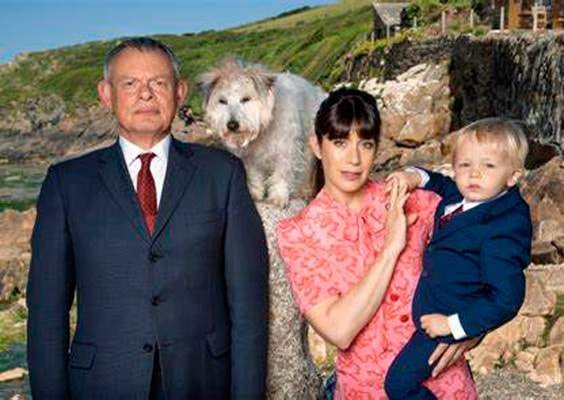 As the Doc Martin series comes to a close after 10 seasons, let’s shed a happy tear two for this  British national treasure. The character of the good Doc and Portwenn found life in the hit comedy film, Saving Grace in 2000, which followed with two movies - Doc Martin and Legend of the Cloutie. Yet the grumpy Doc Martin did not make house calls until the creation of Doc Martin: TV Series in 2004.
Gone is the sweet and lovable guy who wasted no time in settling into the picturesque seaside village, making friends and providing health care with a goofy grin and warm heart. In his place TV’s Doc Martin is now a well-known and respected surgical genius - with a horrible phobia of blood, people, and smiles. 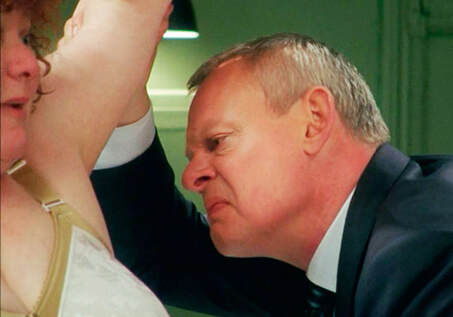 Doc Martin left his fast paced life - plus a whole lot of bothersome emotional baggage - behind in London and chose the most isolated town in the United Kingdom for his new home. Portwenn is a small fishing village boasting plenty of quirky characters, unruly animals, even more unruly teenage girls (who delight in in calling the Doc “tosser”).
The series spans ten seasons, following Martin as he tries to treat his blood phobia and his natural distain of his fellow man. There’s odd and endearing characters, from his sister Ruth, a wise and placid psychotherapist to his Aunt Joan, a brisk no-nonsense farmer; Joe the hapless police chief, pharmacist Sally Tishell, (forever crushing on the Doc), Bert and Al Large, (unethical entrepreneurs), several inept receptionists, and of course, love interest Louisa, the town’s perky and positive teacher. 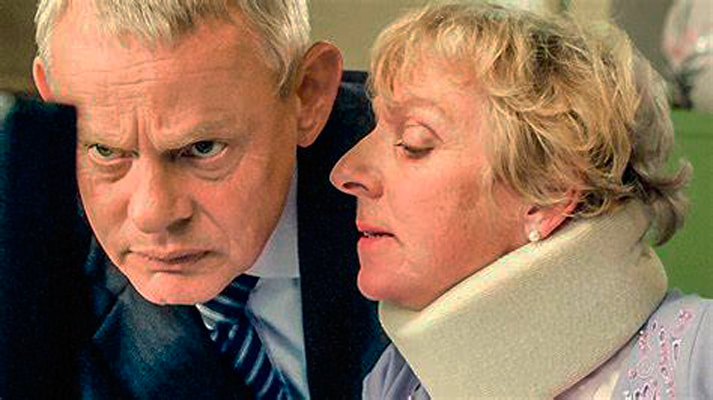 All the characters have flaws that would basically be ignored in a huge urban area like London, but in the small town of Portwenn they become just as obvious - and irritating - as Martin’s perpetual scowl. Every season they seduced me just a little bit more, until I cared very much about their ups and downs.
But a funny thing happened as Doc Martin came to its inevitable conclusion: I found myself realizing this incredibly charming patch of land has a rather obvious lack of diversity. Up the hill and down the valley and all around the bend - there’s nothing but white people. (Although one can catch a fleeting glimpse of two  token cast members in season 10.) 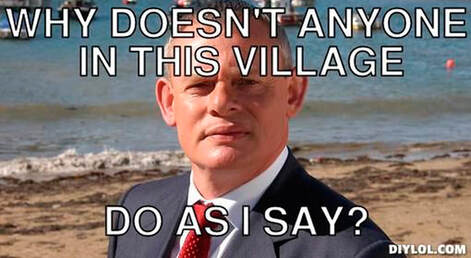 And what would a British tv show be without the tiresome topic of the British class system? All of Doc Martin’s patients - working-class folks - are rude, dirty, and dumb. Most of their ailments spring from either completely ignoring potentially dangerous illnesses, to cases that are born from dirt and a haphazard lifestyle. From farmers to parents, shopkeepers to children, Doc Martin's idiosyncratic behavior hides the “savior” complex that he - and the show’s creators - skillfully craft into every happy ending, even as his insults and contempt are glossed over (“It’s just the Doc’s way.”). 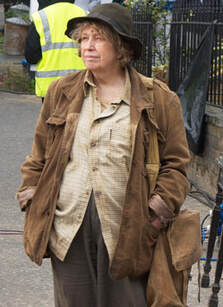 Doc Martin is welcomed as a beacon of enlightenment – however crudely and rudely wrapped up and served to the pitiful residents of Portwenn. And what’s not to appreciate? He’s got a pedigree of professional achievements and a knowledge base that can’t be challenged by anyone this side of the Royal Society of Medicine. Yet Doctor Ellingham brings the big city class system into this tiny town and rubs everyone’s nose it in. 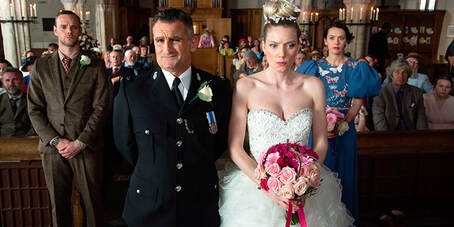 But this creative myopia disappoints in their treatment of these characters as too stupid and proud to seek treatment. And if one looks deeper, all the main characters (save for Ruth) fare no better: Ms. Tishell’s a stalker, (even though she has a degree in pharmacology); Joe is a bumbling, stumbling bundle of ego, (trying to over-compensate for his inferiority complex); and Bert and Al are just lovable soft-core criminals, (Who seem never to get punished, because well, after all - it’s just Bert and Al, innit?) 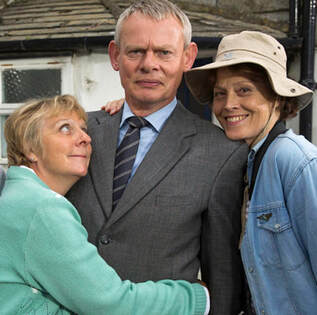 But the fulcrum that saves Doc Martin is the progressive and slightly off-kilter relationship between the good doctor and his other half, Louisa. When the writers created the Doc, they perfectly designed the character of Louisa with precision. 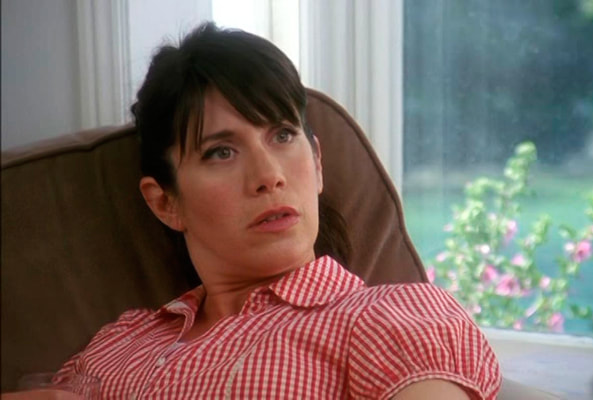 She appears as a polar opposite to Martin - a warm caring person who is proficient in people-pleasing, with a highly developed set of social skills. Yet she is more like Martin then meets the eye: she’s just as OCD, as she spends her days whipping up highly organized plans to make the family’s life run more efficiently, but at the same time she’s woefully insecure about every decision she makes in life. She’s forever fussing over every situation, worrying almost to the point of mania. Like Martin, we just get caught up in the whirlwind, spell-bound. 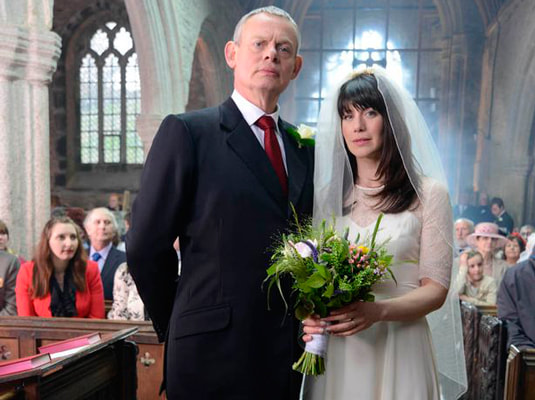 But try as I might, I can’t get too worked up about the show's defects, well, because as the good Doc grumbles on the descending curtain…

“Is there anyone here who has a genuine medical problem?” 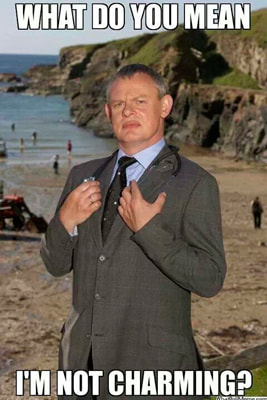