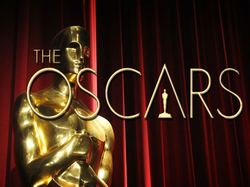 What does a large, multinational corporation do when it's charged with racism and gender discrimination?

Well, if you're the 87th Academy Award show - that's easy! You clog the airwaves with black faces, honor Black Hollywood with a Best Song win, and trot out a classy African-American Academy President to tamp down burnt feelings. Then you allow your employees to make impassioned speeches for equality and women.

We all know that the 2015 Best Acting categories, Best Film and Best Director slots were denied to Hollywood's black artists. And we are reminded - annually - that female directors are ignored. We know because the #OscarSoWhite Twitter hashtag blitz confirms this sad fact. While tweeting might raise national awareness, it does little else. Yet Hollywood is adept at waiting out the PR storm by putting on a big show as their way of diverting dissent. As the controversy dies down with the Oscar after-parties, the following year will guarantee someone of color gets nominated and thus the Academy's bad behavior continue its cyclic spin once again.

The Academy's membership policies and their nominating tactics are  shrouded in mystery.  It’s even got Academy officials reeling off the depressing statistics, as if they’re the victims, too:  Seventy percent of the members are white males over sixty.   And the artists suddenly become mute after it's all over - for another year, anyway - until they discover they’ve been snubbed.

It's ironic that the great liberal tradition of the film community goes up in a puff of smoke when real change is needed. Where are the picket lines? the petition campaign? the boycotts?  The raw truth is that it's easier to make a speech during awards season and wax wise on a cable talk show.  Taking real leadership to change the racist - and sexist - policies of Hollywood's front office could jeopardize one's job!

After all, why put your career on the line to fight injustice when you can just make a movie about it and leave the real protesting to the working class?
COPYRIGHT 2012/2015. Paulette Reynolds.  All CineMata Movie Madness blog articles, reviews, faux interviews, commentary, and the Cine Mata character are under the sole ownership of Paulette Reynolds.  All intellectual and creative rights reserved.