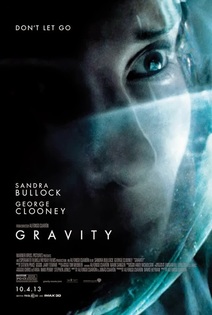 Sandra Bullock in 3D space? Ms. Mata asked her baby boomer “assistant” to review this film, (Darling - those glasses!  Too tacky!) and so I entered the unknown terrain of the 3D film.   I should be familiar with the cheesy 3D experience from the 1950s, but I was too young for horror flicks and those flimsy glasses. Fearful of heights and flying, I donned my pair of classy grey sunglasses, knowing I was going where no Nana had gone before - into space travel with Sandra Bullock and George Clooney in Gravity.

Gravity's been out a little over a month and Oscar buzz is already at fever pitch for Ms. Bullock - and well it should be. In this film she tosses out her usual perfectionist, wise-cracking routine - one that was getting, well - routine.

Playing Ryan Stone, a specialist on her first space mission, Sandra Bullock discards the superficiality that is her comedic bread-and-butter, in favor of a more emotionally minimalist approach. Her Ryan is as robotic as the space capsule that she repairs, deflecting space buddy Matt's chummy small-talk with answers that suggest she's barely there, even though she's hovering in space, far above the earth.

Gravity tells a simple story of mission apprentice Ryan and veteran captain Matt Kowalski, struggling to find their way back home after space debris knocks them off course, stranded outside of their spacecraft. Bullock's character succeeds in stripping away her deepest fears, with a little help from Clooney, as Matt. Clooney easily charms us with the warm confidence of his smile, calming Ryan's - and our - most panicky moments.

By the time Gravity came full circle, 3D could count another fan among its ranks, making it the perfect movie choice for an acrophobic's maiden voyage into "stereo viewing". It definitely enhances movies that are top-heavy with ball-to-the-wall action and expansive themes, even though the more modest Gravity doesn't fall into that category.