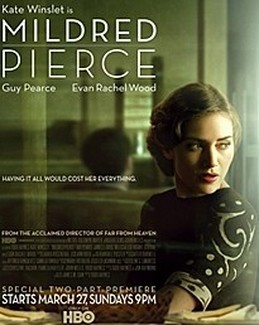 Starring Kate Winslet, Guy Pearce, Evan Rachel Wood, Brian O'Bryne, Morgan Turner, Melissa Leo, and James LeGros.
Directed and co-adapted by Todd Haynes
Released by HBO, March~2011.
Todd Haynes’s uber-Mommie Dearest drama, starring Kate Winslet, reminds one of a faded postcard, found in an old box of precious keepsakes – wistfully pretty to look at – for a moment anyway. The 5+ hour remake of the 1945 Warner Bros film classic, drags in all the wrong places, partly due to the cable giant’s “bigger is better” miniseries mania and the miscasting of the central characters of Mildred Pierce, Veda (the elder), and Monty Beragon. In their determination to render up a carbon copy of the book, written by James M. Cain in 1941, Mildred Pierce 2011 is transformed into a tired and over-wrought tale that signifies a lot of ho-hum.

​Directed and co-adapted for the mini-screen by Todd Haynes, his Mildred Pierce adds all the modern clichés of incestual longings and guy-on-girl action, which does little to save this remake from tanking. If anything, suggesting that Mildred has sexual longings for Veda undercuts the tension and appears like a cheap anchovy thrown into an already over-rich stew. 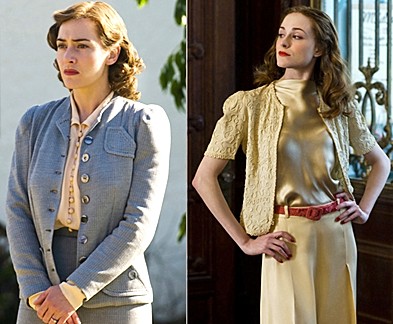 Ms. Winslet struggles to deliver her usual tour-de-force performance in this psychological doppelganger study of Mildred, the mother who obsessively clings to her bitch of a daughter, Veda, while climbing her ladder of success as a restaurateur. Kate Winslet’s Mildred is too polite and refined to hold our interest in this tepid soap opera. The five-part series spends the first three on Mildred and Veda’s complex relationship, which is three times too long in this reviewer’s opinion. 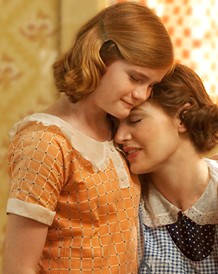 Morgan Turner - spellbinding as the young Veda – is a tough act to follow. It’s too bad that Evan Rachel Wood had to be the one to step into the adult Veda’s shoes, because she often looks silly, like a little girl caught wearing mommy’s makeup. A wiser choice for this pivotal role would have been the smooth, kitty-cat Daveigh Chase, from HBO’s Big Love mini-series.

Guy Pearce, as Monty, the faded Pasadena playboy, comes off as a smarmy schoolboy with a bad haircut. Mark Strong, of Robin Hood fame, seems the most logical choice to bite into this juicy character. In using “name” stars like Wood and Pearce, HBO settled for the bottom-line instead of making bolder casting choices to strengthened their lengthy treatment and Ms. Winslet’s dramatic efforts.

​Brian F. O’Byrne does what he can with the lackluster character of Bert, Mildred’s tiresome husband. Melissa Leo as the straight-talking Lucy, Mildred’s friend and confidant and James LeGros, as Wally, the Pierce’s friendly neighborhood conman, deftly bring new life to these memorable supporting characters.
Kudos goes to award-winning costume designer Ann Roth and the entire Mildred Pierce 2011 wardrobe department, who succeeds in recreating the faded classic feel of the period with timeless colors, simple cuts, and rich pattern work. 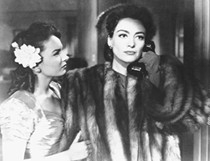 Perhaps I'm just too used to the tough-as-nails Joan Crawford 1945 version of Mildred Pierce, with its dramatic music, noir-ish moodiness, and sensational murder – all in 111 minutes! Naw…what captivates is the snarling dialogue between Crawford as Mildred and Ann Blyth’s Veda and that ferocious slap-out on the staircase. Trying to remake something that’s already a great masterpiece is really a waste of time, because as we all know, a masterpiece is a timeless creation.
The influence of noir smacks us in the face - literally - by the end of the staircase scene’s showdown.   We see Bad Girl Veda, lazily reclining on a couch, gloating over the check in her greedy hands.  Both mother and daughter are dressed in dark clothing, but Veda is highlighted by a large white gardenia, set very close to her face.  Mildred appears more somber and serious, in a dress with a high collar, almost covering her throat.  They stand with a marked distance between them, as their conflict takes them away from the comfort of the couch, where they still stand apart, their voices sharply clashing against each other.  The interplay between light and shadow across the dark furnishings counterpoints the flawless key lighting of Joan Crawford and Ann Blyth’s faces.

Mildred’s rising tension brings her in close, as she drags the truth out of her cunning daughter.  Veda tries to escape up the stairs, standing one step higher than her mother.  The illusion that she’s in control of the argument is just that, as Mildred’s rage gives her the upper hand, easily snatching the check from Veda’s purse and ripping it to shreds.  But Veda gives her mother a right hook that sends Mildred almost to the bottom of the staircase, as she clings to it for dear life.  The kitten has claws, much to Ms. Pierce’s shock.  Yet, Veda ends up losing the fight, as Mama Cat, now standing on equal footing, orders her out of the house - quick, fast, and in a hurry.  Like the child she is, Veda runs up to her room and slams the door. ​ 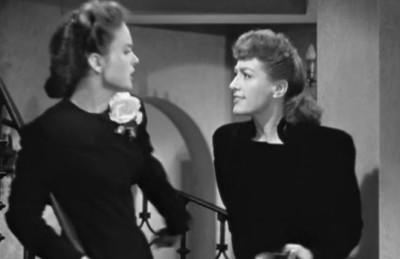 This scene ranks as one of the top ten in Noir cult status, as one law of Film Noir codex is always the fight between good and evil, and if it includes a couple of noir dames - so much the better!  The Strange Love of Martha Ivers (1946)  had a staircase scene, too, but it was a descending series of shots, indicating movement, whereas Curtiz keeps his two stars confined at the bottom, which feels much more restrictive, until the release of the slamming door.
Note:  A Doppelganger is a situation where two characters are reflections of one personality, usually representing the internal struggle between our good and evil impulses.
*  This article was originally published for OutsideHollywoodland.com in March, 2011.
COPYRIGHT 2012/2016. Paulette Reynolds.  All CineMata Movie Madness blog articles, reviews, faux interviews, commentary, and the Cine Mata character are under the sole ownership of Paulette Reynolds.  All intellectual and creative rights reserved.