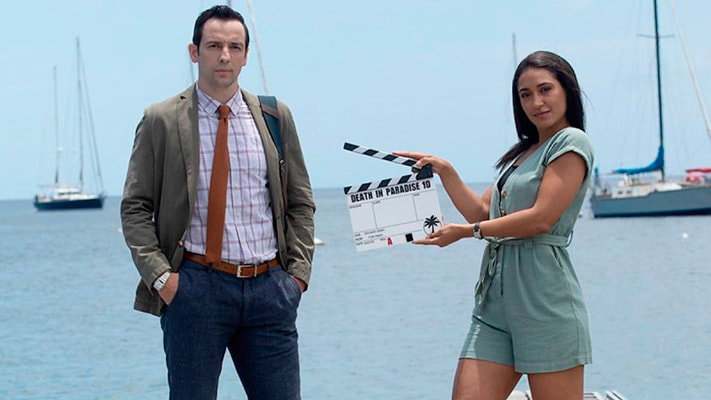 by Paulette Reynolds * May 14, 2021
Created by Robert Thorogood 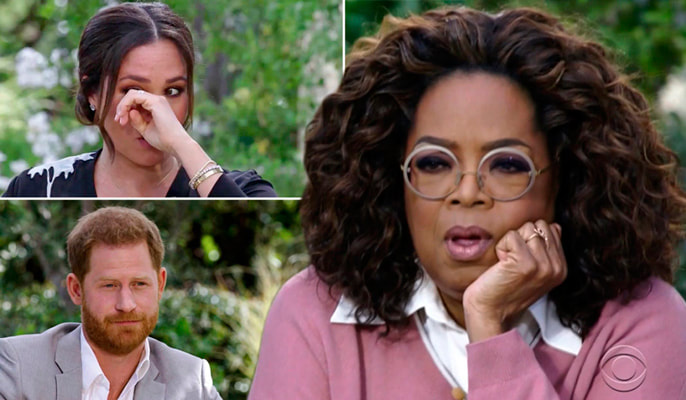 Oprah seems to be musing, "How can the royal family still be racist?"
When Oprah's interview coup with the Duke and Duchess of Sussex aired on March 9, it reminded the world that England still has a problem with racism.  The press went into overdrive demonizing Meghan and neutering Harry, while ignoring the ugly scrum that sticks to England's historical hem, so to speak.  It's not my job to rehash four centuries of colonial "white man's burden" towards the diverse countries that suffered under the yoke of British imperialism. But it's important to note that the UK still considers 14 small countries as part of their "British Overseas Territories", many of them located in sunny climes. 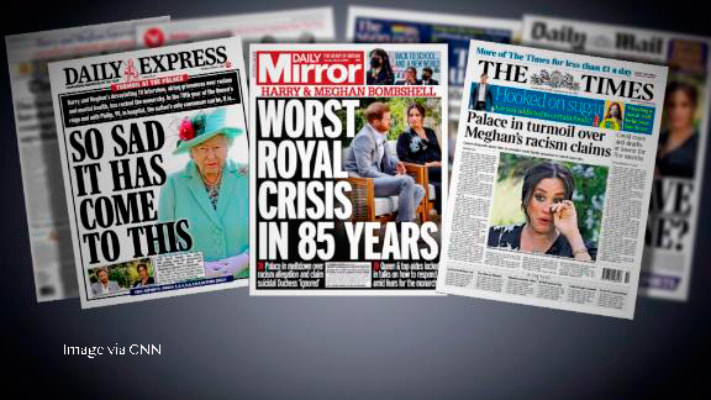 The royal family seem to be musing, "How can we be racist?"
The palace - together with their media outlets - were quick to deflect the charge of racism that involved Meghan and biracial baby Archie.  “The issues raised, particularly that of race, are concerning. While some recollections may vary, they are taken very seriously and will be addressed by the family privately. Harry, Meghan and Archie will always be much loved family."
So everyone shrugged their collective shoulders, after all, it's a family thing - not a national problem - right? 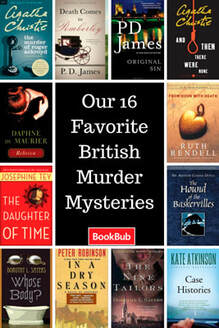 Now the U.K. gave birth to some of the best mystery writers, with Dame Agatha Christie globally acknowledged as the grandmother of the "whodunnits" novel.  BBC and ITV - together with the American PBS - offer Anglophiles and mystery fans literally thousands of hours of the best in detective, cozy mysteries, police procedurals, caper (heist) tales and legal crime dramas.  And while a few might use England's colonial period as a backdrop, one popular television series, Death in Paradise, uses a modern mystery format which unintentionally highlights that racism and sexism still exists in the big island across the pond.
For ten seasons, Death in Paradise has managed to snag the winning spot in the television ratings game.  After all, what's not to like?  Set on the fictitious isle of Saint Marie, this faux cousin to the Virgin Islands is a episodic tourist advertisement for sun and fun, with a murder thrown in for good measure. The bright colors, happy islanders and oh-so-soothing tropical music are all on constant display, reminding us that the little vacation retreat of Honore is a warm and safe place to play. 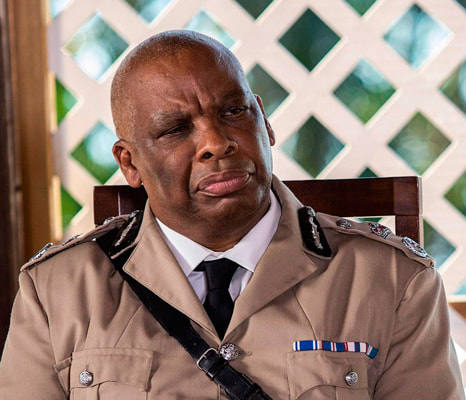 Another white guy?  Hmm, he'll last three seasons...
Commander Patterson is on hand to oversee the police department in his usual stuffy and pompous manner, popping in to ensure his staff quickly arrests the villain.  If he’s not rushing off to some posh event, he’ll be on hand to give sage advice to the young officers.  The police station is lead by the current Inspector Detective - who is always a white male (yes, really!) - sent in from the UK.  Apparently the British Empire can't locate a female Inspector Detective, and so every three seasons they see fit to replace the Last White Guy with a New White Guy.
But no - not just 'any' white guy!  The Inspector Detective must be uptight, nervous and very average looking - after all, he represents the very best of Her Majesty's police force (and one assumes the British male).  The running gag is that he's totally unsuited for island living in some way and is of course, very white:

Richard Poole - your typical by-the-book grim keeper, who of course learned the wisdom on island living and chilled out.

Humphrey Goodman - your average bumbling British clerk, who of course gained more confidence and relaxed as time went on.

Jack Mooney - your classic chatty Irish cop, who did a great job of pretending he was the odd man out. 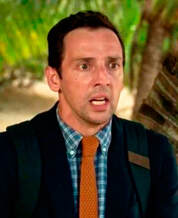 Neville Parker - who is now your common hot-house flower of a man, complete with a wide range of allergies (who will - no doubt - swiftly adjust to island life).

And what other city, village or island boasts a mayor that serves up pretty drinks and love lessons?  (Hasn’t Mayor Catherine Bordey read the job description for Mayor?)
The police staff - including the good Commander - is predictably all black, because no matter how modern the real world is, Britannia will always consider diversity as a lopsided formula of risk + change = unthinkable.  The smoothly running team is lead by one very smart woman (the Detective Sergeant - who never seems to get promoted) and two junior male Officers - one very enthusiastic and one for comic relief (who needs comic relief in paradise?).  During season eight one male was replaced by Commander Patterson's niece as - yup, you guessed it - the comic relief. But she turned out to be a very capable detective and was promptly promoted and - you guessed it - replaced by another male...sigh.
Even if you don't know their names, it really doesn't seem to matter, because the woman takes notes, the enthusiastic cop gets exasperated by the bumble-stumble partner; and when any of them muse about a different kind of life, they’re promptly replaced by another clone.  It's difficult to watch a team of characters who are so very good at doing so very little.  When they’re not working overtime at collecting evidence and fact-checking, the team must stoically listen to their current DI pontificate about some salient bit of trivia, never realizing that - duh - they have gone through the same police training.
See this?  It only stands to reason that x=y because I'm sooo smart!
The season seven team once thought outside the box and gave each character a special subplot.  But as season seven, episode eight concluded, but somehow DS Florence Cassell didn't seem to rate any significant storyline.  After complaining on Twitter, I turned in my Fan Badge and stopped watching for two years.  Now with the advent of streaming channels and a new AmazonPrime membership, the team at Honore beckoned me once again.  The last three seasons have improved for the team, with the mysteries becoming more thoughtful and the spotlight shining more on the team.
Death in Paradise remains a successful little gem - what we might call a fugazi, or a fake - but it still hides behind that genteel, patronizing attitude of colonial superiority.  The island is just a bit too colorful, the music too ethnic, the accents too broad and the regular characters are just too happy - all the time.  Where else can a British tv show go, where the lead character is always a white male from the mainland, giving orders to his black staff?  And adding insult to injury, all their hard work is explained - in front of suspects and staff - by their white male superior, after he's had his usual flash of inspiration to ties up those pesky loose ends.  Oh, the feeling of someone else taking credit for all your work!
Let me bore you with how I solved yet another mystery...
In the beloved cozy mysteries genre, the white detective gathers all the suspects and reveals the how and why - and most importantly - who almost got away with murder.  Unwittingly, the Death in Paradise creative team stuck with this time-tested format, never realizing that the politics of colonial racism and sexism would make this trope a cringe-worthy experience for many women and people of color.  Yes, nine seasons proved just how deep inequality goes in the fair isle that is the UK.

An all-time series favorite is the season 3, episode 1, Death of a Detective, written by series creator Robert Thorogood.  While an ingenious plot, a missed opportunity robbed the episode - not to mention the show - by bringing in Inspector Humphrey, instead of letting the team solve the murder as a tribute to their fallen leader.  It’s difficult to abandon the white savior trope when millions of fans clamor for more of the same. 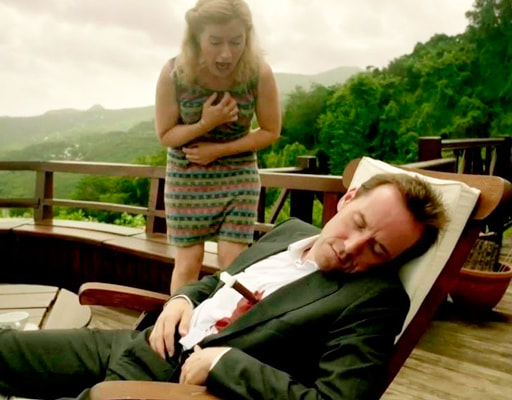 Even in death, I manage to take all the credit!
So how do you reconcile a wonderful police staff that is condemned to work with a boring Detective Inspector?  Perhaps the answer lies in changing the production staff behind the camera to reflect a more balanced equation of gender and racial representation.
From IMDb information, of the 29 directors, only seven have been women, with men directing the lion's share (66) of the 80 episodes - and only three have been people of color.  (The 35 assistant directors have included only 11 women.) And with 35 writers, only 13 women have written a scant 16 episodes - and only two have been people of color.

It would seem that the #TimesUp memo from Hollywood hasn't reached the white men in the front office - you know, back at the BBC. *1
Not all in paradise is sour, given the consistently high ratings.  Death in Paradise, with its colorful, relaxed setting, familiar British guest stars, and stellar cast serve up some rather knotty mysteries.  Everything hums along, episode by episode, until the tropes (so familiar to mystery buffs) lull the viewer into their happy place as the perpetrator is cuffed and escorted away.  It's a tired truth that one doesn't even need to know the names of the four guest actors that serve as suspects for each episode, because they're stuck stuck in a one-dimensional universe - part police procedural, part cozy mystery - where the only difference is the method of the murder.
But a glimmer of understanding began season 10 when - GASP - the DS actually joined the DI in revealing the perpetrator(s) for several of the episodes.
Oh yeah, we're now doing a Team Reveal - and sharing the credit!
Let’s hope that the next two seasons will echo season 10, episode 8, where the final reveal was done by both Inspector Parker and DS Cassell in an unforgettable, poetic moment - as well as a dramatic season finale between Officer JP and Trainee Marlon.
Our Honorable Shout-Out includes DS Lily Thomson and DI Charlie Hume from season one, episode one - My fantasy spin-off would see these two playing the long-game of cat-and-mouse on another island, with DI Chris Ricketts and DS Angela Young as the comic relief…evil grin.
My Fantasy Death in Paradise Spin-Off...
*1 Clipart via clipartartpanda.com
COPYRIGHT 2012/2021. Paulette Reynolds.  All CineMata Movie Madness blog articles, reviews, faux interviews, commentary, and the Cine Mata character are under the sole ownership of Paulette Reynolds.  All intellectual and creative rights reserved.