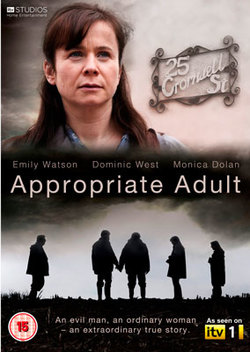 British actress Emily Watson is always willing to play edgy, unconventional women, those brave souls who make choices that few women would dare. Her breakout role in Breaking the Waves, about a woman who explores her sexuality while caring for her bedridden husband at the expense of her reputation, earned numerous awards and nominations. Watson’s characters are skilled at balancing just the right amount of appealing vulnerability with an absence of forethought, which makes for some intriguing roles. 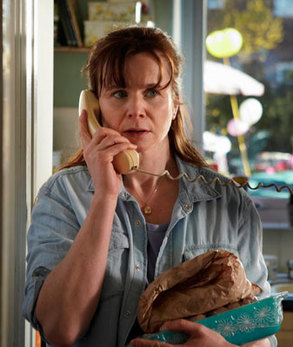 As Janet Leach in Appropriate Adult, Watson once again steps outside the box to play an idealist British working-class wife and mother, struggling to make a difference by volunteering as an “appropriate adult”/advisor for people in policy custody. Barely out of orientation, Janet is assigned to Fred West, arrested for the disappearance (and subsequent grisly murder) of his young daughter, Heather. Dominic West, who portrays serial killer and rapist Fred West, gives a disturbing performance as a sadistic butcher who delights in playing the legal system, alternating between subtle sex-charged banter and detached remorse for a series of deaths involving torture, supposedly at the behest of his prostitute wife, Rosemary, (abrasively played by Monica Dolan). 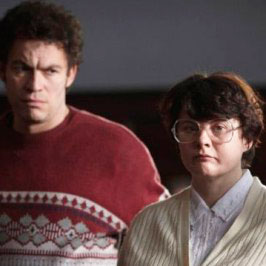 Initially shocked that she’s an advocate for a murderer instead of a youth with “mental/language disabilities”, Janet finds herself more than a little attracted to a man who immediately recognizes that she’s “not always properly loved by men”. He seduces her with tidbits of his acts, drawing her in by appealing to her misplaced sense of loyalty – and perhaps boredom - as he alludes to his crimes, one victim at a time. Based on a true story, Appropriate Adult takes us on a journey through the tangled labyrinth of Fred’s mind and motives, with Janet acting as a modern Persephone, impartially guiding him to his fateful conclusions. Along the way, she mediates an internal struggle between her own desires and ethical standards, always questioning her ever-deepening involvement with such a charming psychopath.

It's worth noting that British crime dramas tend to be more character-driven than their American counterparts, focusing on the bleak lives of damaged people and their ghoulish acts. This can sometimes result in a higher level of discomfort for American viewers, who are used to the plot-driven basics of police procedurals that are so popular in our country. Thankfully, the screenplay by Neil McKay draws a curtain around some of the more horrendous acts that Fred and Rosemary West committed on their own children and known female victims (11 in all). Director Julian Jarrold wisely focuses attention more on the relationship between Fred West and Janet Leach than on the mangled bodies buried under what the British media called “The House of Horrors”.  All three actors went on to win BAFTA awards for their roles.

And so there’s a very good reason why actor Dominic West said "I have this recurring dream where I'm perched on a wall and Fred West is trying to grab me and pull me down".*