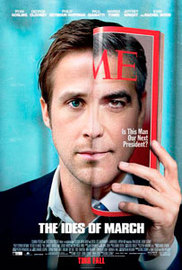 The Ides of March


As the 2016 comical and crisis-prone presidential campaigning begins to engulf the world's attention, it's time to turn to our DVD collection and view The Ides of March again.

Director George Clooney kicked off the 2012 presidential elections with The Ides of March, a tepid political tale about Steven, a cracker-jack staffer whose idealism is put to the test while working for iconic presidential candidate Mike Morris, a la Primary Colors (1998) and The Candidate (1972). Campaign staffers slavish bump into each other, offering such trite phrases like, “This [candidate Morris] is the only one to make a difference in people’s lives”, with an over-blown sense of urgency. And although its title refers to a notable day in history, the rather curious thing is that it actually picked up a fair number of award nominations. Just goes to show that having friends in high places...

Ides is political theatre, featuring hacks that live on a steady diet of speeches, spin, and scandal, talking a language of endorsements, deals, and empty promises in order to win. Steve feels happily “married to the campaign”, a golden go-to boy for the IPhone generation who needs to “believe in the cause”. He becomes romantically involved with campaign aide Molly Stearns, who’s carrying a secret that threatens the Morris campaign. As events conspire to take Morris down, our political panther manages to use his on-the-job training to emerge as top dog, complete with a shiny coat of bitter cynicism.

Chest-thumping dialog (“I'm not a Christian. I'm not an Atheist. I'm not Jewish. I'm not Muslim. My religion, what I believe in is called the Constitution of United States of America.”) allows writer Clooney to lovingly paint liberals as the nice guys who refuse to play as dirty as their conservative rivals. (Is this George’s first trip to an American political campaign rodeo?) His cinematic homage to the Obama vision is completed by Morris parroting the all-too-familiar ’08 Limosine Liberal campaign rhetoric while highlighting MSNBC’s media pundits that currently frequent the White House. Supporting cast members Giamatti, Hoffman, Tomei, and Wodd sleep-walk through what turns out to be just another piece of hazy-dazy propaganda created as a favor to the Democratic Party re-election machine.

The original Ides of March was intended as a warning to Caesar, and like the seer who foretold his death, this reviewer can predict “It’s going to be a long campaign season”.