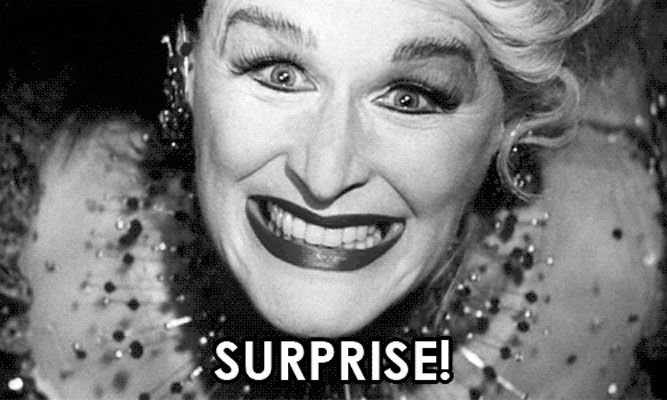 FEMALE VILLAINS TO DIE FOR
They say that the female of the species is often deadlier than the male, especially in celluloid! Often overlooked in favor of the more athletic male villain, filmdom’s female vipers tend to delight in psychological games as necessary foreplay, making them even more fascinating to watch.
February 24, 2017/Paulette Reynolds 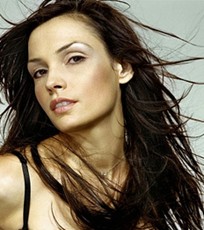 Famkee Jensen – as Jean Grey/Phoenix in X Men United, as Xenia Onatopp in Golden Eye.
​
"Looking back, boy, has there ever been a stigma in being a Bond Girl. That's what my mission in life is, just to prove them wrong. That's why I have such an urge to keep going and proving that. It's so silly. What on earth does the way you look have anything to do with whether you can act or not." 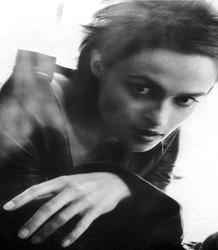 Helen Bonham Carter – as Bellatrix Lestrange in Harry Potter (’07, ’09, ’10, ’11), as Mrs. Lovett in Sweeny Todd.
​
"I'm drawn to emotionally damaged characters because there is more to unlock." 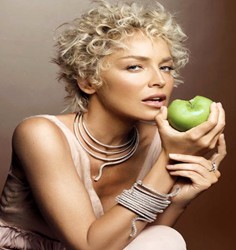 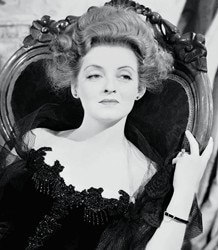 Jennifer Jason Leigh – as Hedy in Single White Female
​
"I like a movie that the audience actively has to participate in, and not just casually observe. Whatever my part in it, just as an audience member, I find that exciting." 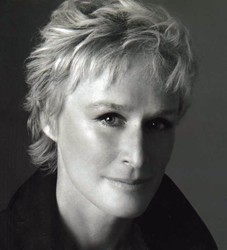 Glenn Close – as Alex Forrest in Fatal Attraction, as Marquise Isabelle de Merteuil in Dangerous Liaisons, as Cruella de Vil in 101/102 Dalmatians.
​
(1996, on Fatal Attraction) "The original ending was a gorgeous piece of film noir. She kills herself, but makes sure that his prints are all over the knife, and he gets arrested. He knows he didn't do it, but he's going to jail anyway. But audiences wanted some kind of cathartic ending, so we went back months later and shot the ending that's in the movie now." 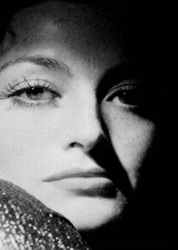 Joan Crawford – as Eva Phillips in Queen Bee, as Crystal Allen in The Women.
​
"I love playing bitches. There's a lot of bitch in every woman - a lot in every man." 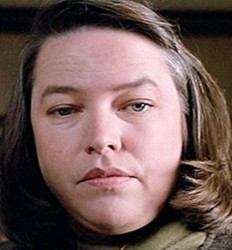 Kathy Bates – as Annie Wilkes in Misery.
​
"I look for a role that hopefully I feel empathy with and that I can understand and love, but also that has that challenge for me to play - a different kind of role, a different type of character, a different time period."
​
http://www.brainyquote.com/quotes/authors/k/kathy_bates.html 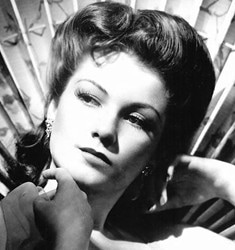 Anne Baxter – as Eve Harrington in All About Eve.
​
"I patterned Eve [Harrington] after the understudy I had in a Broadway play when I was 13. She actually threatened to finish me off. She was the bitchiest person I ever saw." 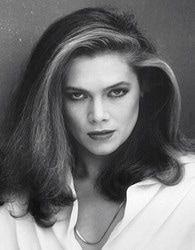 Kathleen Turner – as Mattie Walker in Body Heat.
​
"I often play women who are not essentially good or likable, and I often go through a stage where I hate them. And then I find the reasons why they are that way, and end up loving and defending them." 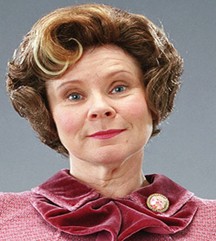 Imelda Staunton - as Delores Umbridge in Harry Potter and the Order of the Phoenix.
​
"I am a character actress, well, let's say, I am a leading character actress who does interesting, odd parts." 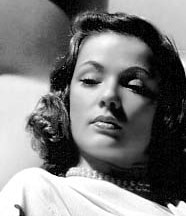 Gene Tierney – as Ellen in Leave Her to Heaven, as Isabel in The Razor’s Edge.
​
"When you have spent an important part of your life playing Let's Pretend, it's often easy to see symbolism where none exists."
​
http://www.brainyquote.com/quotes/authors/g/gene_tierney_4.html 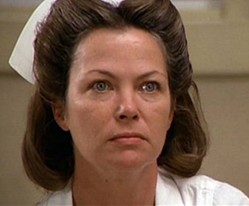 Louise Fletcher – as Nurse Ratched in One Flew Over the Cuckoo’s Nest.
​
[In sign language to her deaf parents, upon winning the Oscar for Best Actress] "I want to thank you for teaching me to have a dream. You are seeing my dream come true." 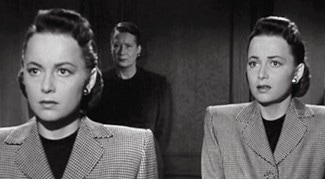 Olivia de Havilland – Ruth/Terry Collins in The Dark Mirror, as Rachel in My Cousin Rachel.
​
"Playing good girls in the '30s was difficult, when the fad was to play bad girls. Actually I think playing bad girls is a bore; I have always had more luck with good girl roles because they require more from an actress." 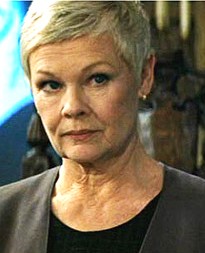 Judy Dench – as Barbara Covett in Notes on a Scandal, as Lady Catherine de Bourgh in Pride and Prejudice.
​
"Once, a long time ago, I read some bad reviews and I made the decision not to read the reviews. You get some critics who don't like you, or the play. But they don't have to do it every night. I don't want to be affected like that. I loved doing "Madame de Sade." A friend told me not to apologize for myself or the play, and I won't. Then I cast it all off and go and put my feet up under the chimney with my family." 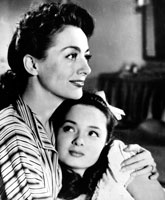 Ann Blyth – as Veda Pierce in Mildred Pierce.
​
Was she aware Shirley Temple was also considered for Veda? "No. I found out much later. All I knew was that lots of young actresses tested. But director Michael Curtiz told me, in his wonderful Hungarian accent, 'Don't vorry, Annie. You haff de part.'" The role is "outstanding. Even today, when I get mail, people mention it."
​
http://www.ebar.com/arts/art_article.php?sec=film&article=203 The real Veda Pierce: a serene Ann Blyth by Tavo Amador 7/20/06 The Bay Area Reporter 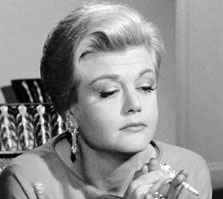 Angela Lansbury – as Mrs. Iselin in The Manchurian Candidate.
​
"I just stopped playing bitches on wheels and peoples' mothers. I have only a few more years to kick up my heels!" 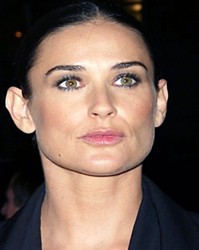 Demi Moore – Madison Lee in Charle’s Angels : Full Throttle, as Meredith Johnson in Disclosure.
​
"There's this idea that if you take your clothes off, somehow you must have loose morals. There's still a negative attitude in our society towards women who use a strength that's inherent - their femininity - in any way that might be considered seductive." 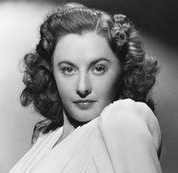 Barbara Stanwyck – as Phyllis Dietrichson in Double Indemnity, Martha Ivers in The Strange Love of Martha Ivers, Leona Stevenson in Sorry, Wrong Number.
​
"My only problem is finding a way to play my fortieth fallen female in a different way from my thirty-ninth." 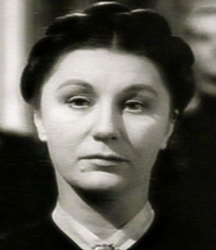 Judith Anderson – as Mrs. Danvers in Rebecca.
"I may play demons, but I've never played a wimp!" 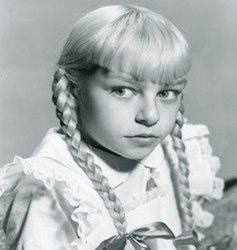 
Patty McCormack - Heads a very short list of pint-sized villains with a thirst for inflicting violent ends on children and adults alike. Stars as Rhoda Penmark in The Bad Seed.
​
"I have a feeling that the part of Rhoda was so indelible when I was young that afterward I had a rough time sitting on some of my strengths."
​
http://www.whosdatedwho.com/tpx_32553/patty-mccormack/quotes
COPYRIGHT 2012/2017. Paulette Reynolds.  All CineMata Movie Madness blog articles, reviews, faux interviews, commentary, and the Cine Mata character are under the sole ownership of Paulette Reynolds.  All intellectual and creative rights reserved.