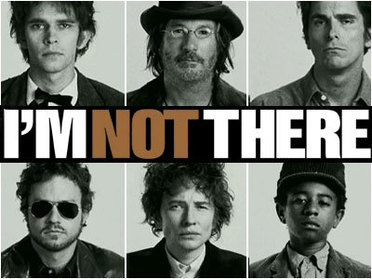 Last night, I had the strangest dream. I was going through life as six different aspects of myself! I was famous but not happy, because everyone was misinterpreting what I said, and there was this huge spider walking around...

Long ago, I was one of those flower children who appreciated Bob Dylan’s music. Yet, my decision to watch I’m Not There rested solely on the buzz surrounding Cate Blanchett’s Oscar-nominated performance as one of his personas.

One major flaw of this movie is that it’s awash with symbolic elements that would irritate Dali and perhaps Dylan himself. The pseudo-symbolism is missed if the viewer hasn’t followed Dylan’s life or his many musical works.

One character was a real cynic, another kind of a lover, then it got confusing with young African-American kid, calling himself Woody Guthrie and some old dude running around, who I think was Billy the Kid?

The second weakness of I'm Not There was touted as its greatest strength, where an ensemble cast of no less than six actors portrayed different aspects/life periods of the elusive artist. The biggest performance disappointment was the late Heath Ledger, who essentially was playing himself, all nervous twitches and agonizing over a failed marriage.

...So okay, Billy the Kid was from another album, right? And the dude playing him was supposed to represent his older, wiser self?

See what I mean? Richard Gere was absolutely a wasted gesture as the older Dylan, while Christian Bale played the youthful counterpart more convincingly, probably because it was a more direct representation of actual events. (Are the Indie Gods going to strike me down for this?)

Gee, there were about 15 producers on this movie! Did that make it any better?

I wondered which producer decided on the musical choices? Maybe they sat around and said, “Hey, let’s save a few bucks and forego his internationally known classics – you know, the “All Along the Watchtower”, “Masters of War”, etc. Instead, let’s use his more obscure material – cheap, see?”

How can one show clips of Vietnam and Nixon and not play the aforementioned “Masters of War”, which is probably the single greatest anti-war song of the whole era? This is just another reason why I'm Not There fails to win this heart, but Cate Blanchett’s performance earns my admiration.

Since one of the main challenges in undertaking a biography of a person's life is giving the audience an accurate accounting, Ms. Blanchett did deserve to win that Oscar, dammit! As one aspect of Dylans' elusive personality, she dons his skin and bares his soul for the brief shining moments that she glimmers on the screen. Did she capture the true essence that is - or was at that time - Dylan? Maybe, and then again, maybe not...because who can really translate Dylan's life except the great music man himself.

"Just because you like my stuff doesn't mean I owe you anything." Bob Dylan