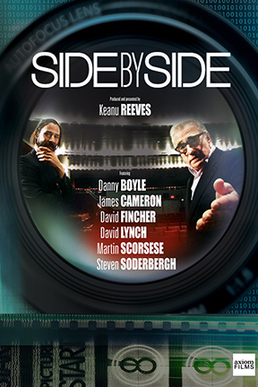 Silencing Voices :
How Side By Side
Shut Out
Female Directors

Everything changes, even in Hollywood, from faces and names to technology. Since the 1890s, movie-making has transformed from the simple nickelodeon viewers, to creating full-length films and breaking the sound barrier.  Early audiences remember their first delightful glimpse of an animated Gertie the Dinosaur and later marveled at the colorful world of Snow White.  Film techniques have continued to improve and impact the film industry from the very beginning.   Change is a constant feature, and nowhere is this fact more apparent than in the introduction of digital systems into the cinematic process. Side by Side, a documentary narrated by actor Keanu Reeves, not only highlights the differences between photochemical film and digital techniques, but also the great divide among how film directors view this transformation.

The documentary centers on the two methods of creating a cinematic image, as Reeves rather dryly explains:

"The camera is a tool that focuses and measures photons of light and records them as images. With a film camera, light enters through the lens and hits a frame of film behind the lens. The film is covered with an emulsion that contains grains of silver halide crystals. These crystals react chemically when light hits them, and the crystals change into silver metal when they are developed. A photographic image is formed on the film. A digital camera does not use film. Instead, it has an electronic sensor, or chip, behind the lens. The sensor is made up of millions of tiny picture elements, or "pixels" for short. When light enters the camera, it hits the pixels and creates individual electronic charges. These charges are measured and converted into digital data that represent the image."

Alrighty! Got that? In short, the photochemical film takes time to develop and the creative team views the filmed scenes the next day, hence the word, "dailies". No one but the cinematographer really has an exact idea of how the scene will look. Contrast this with the instantaneous results of the pure image caught immediately - that everyone, including cast members - can view right on the set.

Wow! Great, right? Ah, not so fast. This is where the artistic approach kicks in, as such concepts of craftsmanship, light, texture, feelings, and technology are explored. Add to that the effect that digital shooting has on cast members and their performances, as well as locating qualified digital cinematographers…ah, the debate rages on.

The following comments encapsulate Side by Side's dilemma...

"Film is a 19th century invention. We are at the top of the photochemical process. This is about as far as it's ever gonna go." George Lucas

"We really are in the midst of some sort of revolution that threatens the status quo. This is a potentially either scary thing or a very liberating thing." Steven Soderbergh 1

Produced, directed, and edited by males, Side by Side also includes film editors, cinematographers, and actors - 69 in all, to further engage in this round table conference, of sorts. Yet, out of 69 industry professionals interviewed, only seven (7) were women and only one notable woman director - Larry/Lana Wachowski - is included in this fascinating documentary. Female directors Sofia Coppola, Mira Nair, Jane Champion, Kathryn Bigelow, Sarah Polley, Julie Delpy, Madonna, Penny Marshall, Tanya Wexler, etc., are noticeably absent from the discourse.

The documentary then, highlights something else - that women in the industry are still excluded from directing the future of film. In her article for Jezebel.com, Laura Beck notes, "There are 15.24 male directors for each 1 female director."2


Given this ratio then, the inclusion of Lana Wachowski makes perfect sense.

Since only seven (7) females were included in the making of this production, Side by Side can't be taken seriously as a documentary feature by this reviewer. This industry concern remains for the moment, curiously one-dimensional, as the plethora of male voices all but drowns out relevant debate and discussion with the other half of the directing community. Side by Side lost an opportunity to truly break new ground with this vital topic. As digital filmmaking becomes more of an industry influence, women directors can create more documentaries on this theme, without waiting for a nod from the big boys - something that may never arrive.

After all, everything changes, doesn't it?