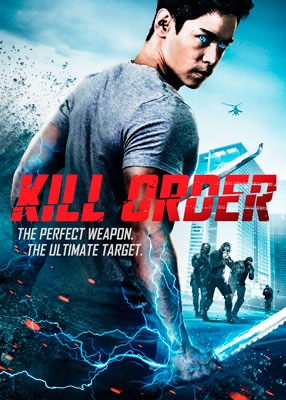 
Starring Chris Mark/David, Jessica Clement/May, Daniel Park/Andre, Reuben Langdon/Adam Cross, Melee Hutton/Dr. Jenkins, Amos Crawley/Mr. Henderson, Scott Cavalheiro/The Scientist
As a film critic I sometimes find myself entering an unfamiliar film genre with a wary eye and a nervous twitch.  And when it comes to the world of kung fu and karate, it’s hard to rope me into watching.  Yes, Kill Bill, Kung Fu Panda, and Shanghai Noon were thrilling, but the absence of female lead characters in most martial arts films leaves me rather cynical about the entire genre.

So when I got the chance to see KILL ORDER and interview the director, James Mark, I felt that old twitch creeping up.

Kill Order straddles the realms of martial arts action and science fiction, with a surprisingly strong helping of film noir undertones.  This is James Mark’s first full-length film as a director-writer-producer, after a solid 12 year career in stunt performing. 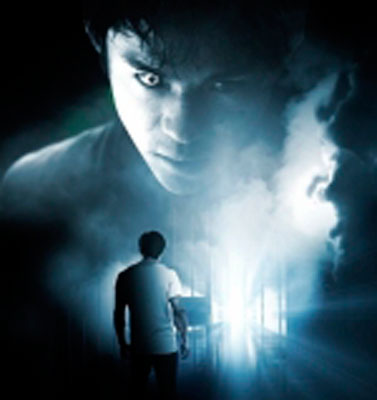 Paulette: Every director has a creative vision for each project they make.  What do you think your vision was for KILL ORDER, and did you reach it?

James: Well the goal from the beginning was always to showcase the abilities of my brother, Chris, who is our lead, and the members of our stunt team, company Team 2X.  We wanted to make a project that showed off what they could do without being stunt doubles, by giving a face to the characters.  The focus was primarily on our action because we come from a background of stunt performing.  We’re very happy with how that all turned out and it was a nice step forward in our filmmaking dream.
His brother, Chris Mark, plays David, a stranger in the strange land of the urban jungle, where a select group of trained assassins are relentless in following the orders from a shadow group known as The Organization.  David, the target, is programmed to react violently when experiencing intense pain.

Paulette: The central theme appears to be intimacy vs isolation - how do you think that impacts your main character?

James: David doesn’t really have a good concept of what life is about, he just has an idea of what life should be from looking at people around him.  in the beginning of the film he’s confused and going through the motions as he’s been instructed to do.  We brought that into play in the classroom because it was talking about his internal struggle with his own demons.

Paulette: How did you feel this struggle affected his outlook on life?

James: The main idea is about how not feeling loved can push you in one direction or push you in the other. At the end of the film there is a bit of a cliffhanger because we don’t dive too much into the mythology of the film -  we actually have something much larger in mind later, if we can get the funding for it.
Paulette: Ah, I did feel a sequel in my bones while watching!  The entire production offers a clean and crisp feeling - and it had me with its noir-ish cinematography.  Was that intentional on your part or was it a collaborative effort between you and cinematographer Justin Lovell?

James:  It was a collaborative effort - I’ve worked with Justin for many years, he’s always been our photographer on our digital short videos.  We have great chemistry and we’re good friends, and I loved the concepts that we came up with together.  But during the action scenes I operated the camera.

Paulette: What is the single most important inspiration that lead you to make the transition from the role of stunt performer and choreographer to writing and directing?

James:  Over the years my team and I put out a number of digital videos online - we did that more as a hobby - and it was a passion of ours to always create.  When you’re on a large production you’re generally at the mercy of the director and producer - you have many bosses and things change - your personal creative vision never ends up the way you might have seen it because it’s not your project.

While I was making these videos I directed one, called Jedi Ninja, and it got over four million online views.  I really liked the thought of creating a concept in my mind and putting it on the screen, so I took a step towards transitioning into that role by directing a web series for IGN called Ultimate Fan Fights and we did very well.  So when we finished that we said, “Let’s start and do a full-length film”. 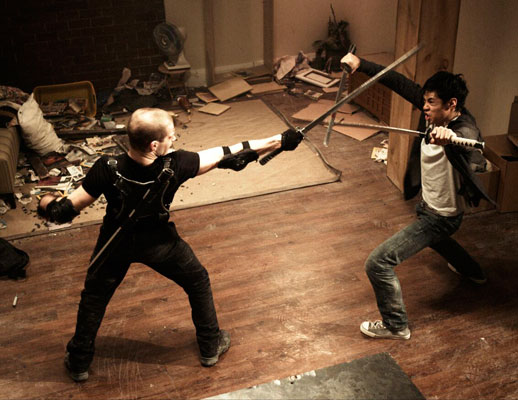 Paulette: KILL ORDER featured a wonderful martial arts crew, and although the film was more male-centric, would you consider creating a central female character in a future production?

James:  It’s definitely possible and something that we want to do - I don’t want to give too much away.  If we do get the opportunity to make another film, there is a strong female lead in it, who has an incredible ability.  I’m not going to say what her role is exactly [laughs].

Paulette: Good!  I think the ‘Times Up’ movement isn’t about excluding males, but about including more females.

Paulette: Will we be seeing more of the red-eyed nemesis with the extreme superpowers in the future?

James:  Yes - there’s a much bigger storyline for that character and his relationship  to David.

Paulette: Who actually played him?

James: I played that character!  We had an actor drop out and I jumped in.

Paulette: I know that the first project is always going to be a little shaky, there’s always things that you shoulda-woulda-coulda done differently. But it's exciting to see that you have a real vision, and  its combined with your skill and I’m looking forward to seeing more of your projects.   Thanks for sharing with CineMata's Movie Madness!
While it's true that this fine action film may suffer a bit from an underdeveloped storyline that lacks sustained tension or character development, the fight scenes have a mesmerizing precision that recalls the beauty of Crouching Tiger, Hidden Dragon.

Every creative project is an opportunity for learning one’s craft, and success arrives after the artist finds their true creative voice.  KILL ORDER is an extraordinary adventure and promises that James and Chris Mark, plus the entire Team 2X have a bright future ahead in the film industry.

And besides, I’m looking for that showdown between the red-eyed bad guy and our blue-eyed hero.
Paulette Reynolds:
​
@PG13Reynolds
@CinesMovieBlog