I wonder what would happen if an actor refused their statuette in support of more recognition for women directors?

Google the term 'auteur directors' and one is deluged with 51 male directors.   Go ahead, try it - I'll wait. *1

Zero.  Nothing.  No, not one female name is listed.  Given the recent discussion over Hollywood's systematic refusal to hire women directors, is it surprising that they ignored the likes of  the 61 female directors shown here?

The stark fact that the 2019 Golden Globes and BAFTAs again shut out women directors for nominations makes one wonder just what the #TimesUp movement needs to be doing differently to get the point across.
Perhaps instead of making impassioned acceptance speeches about hiring more women - while clutching their awards - those female stars could do a brave act and call out the associations that systematically deny female representation for women directors.
But what does this have to do with the Auteur director? 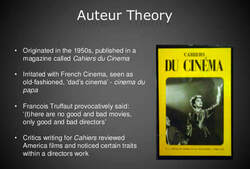 Leaving aside the fact - for a moment - that women are systematically excluded for directing nominations and awards, let's look at another facet of how women directors are denied creative recognition for their work...
​Since film is a collaborative effort, the notion of auteur snatches that effort away and places it into the hands of 'the director'.  Hollywood packages a cinematic creation much like a book, as a single product of one solitary genius - usually a male - struggling to bring his baby to life.  Then that same marketing ploy promotes the film - with the help of film critics and the media - as another masterpiece by yet another auteur director who just happens to be a male.
It's heady stuff, much the same as any film script where the hero - again, a male - saves the day (and the girl and the town and humanity).  The romanticism surrounding the auteur director enthralls the film buff in numerous online articles, polls and commentaries, where the focus still remains on male directors.  Don't get me wrong - how a director approaches their work is a valid topic, yet the appreciation should be open to every director, regardless of their gender.
But just what is the auteur theory, how did it begin and what is its impact on how we look at cinema?

Simply put, auteur means "certain traits within a director's work".  Like a signature, one can view a film and immediately recognize it as the work of a particular director.  But Art - like life - is rarely simple.  In the 2004 film Stage Beauty, one character warns, "Whenever we're about to do something truly horrible, we always say that the French have been doing it for years." So we must travel to France, circa 1948, to trace the not-so-humble beginnings of the Auteur Theory. 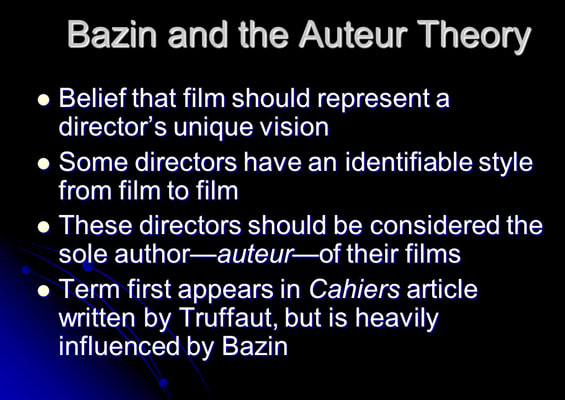 French film critics Alexandre Astruc and André Bazin spearheaded the auteur director movement.  Astruc saw cinema as a "...language, I mean a form in which and by which an artist can express his thoughts, however abstract they may be, or translate his obsessions exactly as he does in the contemporary essay or novel." This he condensed into the director as the exclusive author of a film, with his personal narrative, via the visual elements of "camera-stylo" - or "camera-pen".  Astruc's use of the masculine pronoun leaves little doubt just who he considered important enough to speak such a rarefied language. *2
Bazin took this concept one step further - vis a vis an article by Francois Truffaut (a student of Bazin), entitled "A Certain Tendency of the French Cinema", published in Bazin’s periodical Cahiers du Cinéma in 1954, that argued any film embodies the director's unique perspective. This "sole authorship" became one of the pillars of the New Wave cinema movement in France.  It’s doubtful they even considered what  impact their narrow observations would have for female directors - and for decades of filmmaking.
These film critics served to encourage codification of the male narrative through this (as yet unnamed) new theory.  It needed someone to reinforced the male gaze with a set of auteur "rules", so that the male-centric cinema wave of the 1960s and 1970s would continue, unfettered by female participation.  Enter Andrew Sarris, an American film critic who created the term "auteur theory" in "Notes on the Auteur Theory", in 1962.
"...the first premise of the auteur theory is the technical competence of a director as a criterion of value...the second premise of the auteur theory is the distinguishable personality of the director as a criterion of value...the third and ultimate premise of the auteur theory is concerned with interior meaning, the ultimate glory of the cinema as an art.  Interior meaning is extrapolated from the tension between a director's personality and his material." *3
He then normalized the dominance of the male director as Auteur by focusing on 14 directors that he considered the "greatest".  Charlie Chaplin, Robert Flaherty, John Ford, D. W. Griffith, Howard Hawks, Alfred Hitchcock, Buster Keaton, Fritz Lang, Ernst Lubitsch, F. W. Murnau, Max Ophuls, Jean Renoir, Josef von Sternberg, and Orson Welles were included in his seminal work, The American Cinema: Directors and Directions 1929–1968 (published 1968), hailed as the 'Citizen Kane of film criticism'. *4
Sarris romanticized male directors on both sides of the Atlantic and propped up the Hollywood male director's club during the feminist movement of the 1960s and 1970s.  And while film critic Pauline Kael criticized the auteur theory, it had little effect on Hollywood's practice of shutting out women directors.
The auteur theory conveniently ignores the obvious - that creating a film transcends a single person.  Cinematic magic depends on an entire cast and crew to bring a script to life. But the theory was never meant to do anything but elevate the status of the male director, so he could impose his narrative - via the male gaze - on society.
The creation of auteur began as an intellectual exercise among cinephiles, something to be debated in the salons and cafes, and then saw life in print.  Since most of the critics were male, there naturally left no room to realize the necessity of including their female peers in exploring cinematic culture.  And, since most of the artists behind the cameras were male, who really cared?
Extolling the genius of male directors keeps the focus of creativity solely on the male gaze and its rigid narrative of male supremacy.  Language has the power to inform, educate and entertain, and for almost a century of cinema this power has defined societal expectations for women.  When an electronic search engine like Google erases hundreds of women directors at a keystroke, it's more than just a mechanical snafu.
Are we still so invisible?  The universal experience of feeling erased is often expressed by famous Hollywood personalities as they clutch an award, "Growing up, it was hard to see people like me on the screen..."  Those marginalized by color, gender or ability are acutely aware of the effects that the pattern of exclusion creates.
For the current renaissance of women artists behind the camera - and in the boardroom - to succeed, the entertainment community must recognize that ‘Auteur' is many things, but its no longer a green light for male domination.