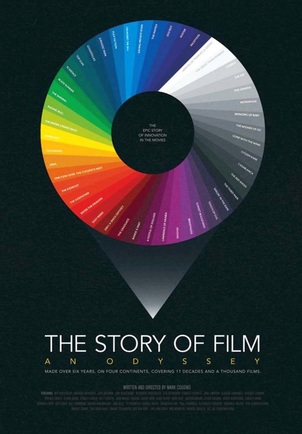 The
Story
of Film:
An
Odyssey

Combining cinematic history with a global love of filmmaking, The Story of Film is a 15-part look at films and their creative process.  Director and film critic, Mark Cousins, takes a loving look at movies from every angle, fusing culture, history, and technique into this visual compendium.

It's clear that director Cousins has a real love affair with foreign and independent films.  This is one area that often gets left on the cutting room floor and is a welcome addition into his documentary.

He brings women filmmakers into their own by examining Hollywood's refusal to acknowledge and promote women behind the camera.  One nice touch is an interview with Jane Campion, on of only four female directors ever nominated for an Academy Award. (don't get me started!)

An added caveat is that he narrates his cinematic opus, where his distinctive Irish brogue creates a rare poetical experience.